Don't like 3-D movies? Neither does Inception's Christopher Nolan

If you like the new wave of 3-D movies, great. Enjoy them. If you're like some of us, and kind of like to watch movies the old-fashioned way, at least there's a big gun in our corner. 3-D has James Cameron, director of the two biggest films of all time. We'll have to settle for Christopher Nolan, who only directed the biggest film of a decade.

Over the weekend, Nolan gave a Q&A at the Los Angeles Times' Hero Complex Film Festival, in between screenings of Insomnia and The Dark Knight. He started talking about 3-D, and he made a lot of good points. Here's something to think about: When you're wearing glasses and stuff's flying out at you, you can't get lost in the cinematic experience. 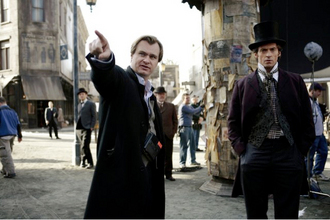 "That's one of the reasons why I'm a little reluctant about 3-D at the moment, because I find it as a viewer impossible to forget that I'm watching a film," Nolan said on June 12 in Hollywood. "I think until they can find a way around that, it's going to be problematic."

Also, don't you kind of get that a movie takes place in a 3-D world anyway? Does it really have to get in your face? "The truth is, I think it's a misnomer to call it 3-D vs. 2-D," Nolan said. "The whole point of cinematic imagery is that it is work in three dimensions. Ninety-five percent of our depth cues come from a collusion of resolution, color and so forth. So the idea of calling a 2-D movie a 2-D movie is a little misleading."

Nolan's real beef with 3-D, though, is that the lenses of those glasses drastically lower the quality of the film. He uses a lot of technical terms, but he knows what he's talking about. FYI: Foot-lamberts are a unit of luminance, and a beam splitter is the device that splits the cameras between the right and left eye.

"The truth of it is, when you watch a film here [in 2-D], you'll looking at 16 foot-lamberts," Nolan said. "When you watch it through any of the conventional 3-D processes, you're looking at 3 foot-lamberts. It's a massive difference. Having struggled for years to get theaters to get up to the proper brightness, we're now seeing polarized film going back to worse than we were. There are a lot of problems with it. One of the things that people don't talk about is shooting in 3-D requires shooting on video. If you mask it to 2.40 [aspect ratio], you're only getting 800-900 lines of resolution. You have to use a beam splitter. There are enormous compromises, in other words."

This isn't just talk. Nolan gave 3-D a chance on his latest movie, Inception. If there's any way to do 3-D right, Nolan says it's actually converting it after you've filmed it (the method that James Cameron opposes, by the way). Nolan still decided not to do that for Inception.

"We did tests on Inception to look at the post conversion process," Nolan said. "It worked very well. It's quite easy to do, in fact, but it takes a little time. We didn't have time to do it to the standard I would have been happy with. Post conversion technology, I think, probably for me would definitely be the future, but really it's going to be up to audiences to decide how they watch their films. But I'm certainly quite pleased with Inception that we're able to present it really bright and really clear. As the technology improves, those differences may change, and that's what I would hope for, but really it'll be up to audiences."

Nolan kept it real the whole way through making Inception. Even though it's a movie about a dream world where buildings crumble into the sea, he didn't want it to look like CGI. Come on, don't those buildings crumbling in the trailer look real?

"There's a shot in the trailer for Inception with massive buildings crumbling into the sea," Nolan said. "Even that, we took the actors out to Morocco. We shot the beach with waves coming in, some small representations of buildings there just to give them something to start with. Obviously it was always going to be a massive CG affair, but just to have lighting to match, textures to match to, they're able to do much, much better work. So everything we do, we try and do something in camera they can pin their work to."

We finally get to see Inception July 16. Nolan's still putting the finishing touches on it this week. "I just came off the dub stage, just finished the last reel's sound work for our early screenings," he said. "I've got about another week finishing it off."