Why Katee Sackhoff's 24 role will surprise you

Katee Sackhoff's character in Fox's upcoming eighth season of 24 is no Starbuck a la Battlestar Galactica: As computer analyst Dana Walsh, she does not kick any butts (at least not in the four episodes we've screened so far), and early viewers are shocked to see Sackhoff play a passive, even fearful character. (More spoilers follow!)

Does 24's Tony Almeida have a future? Well, he's not dead anymore
Your complete guide to all the recently canceled sci-fi TV shows

"It's interesting," Sackhoff said in a group interview Monday in Pasadena, Calif., as part of the Television Critics Association winter press tour. "I think that I do that well, and I think that's why they want to see me do that. It's hard not to. It really is. It's hard to sit back and play a computer analyst. It's as hard for me to play that as it is for people to watch it. I hope one of these days that I do the latter just as well and that people buy me in both scenarios."

Even if CTU's new analyst doesn't exert herself, she still kicks Chloe's butt, at least intellectually. Chloe (Mari Lynn Rajskub) comes back to work having fallen behind on the latest CTU technology, and Sackhoff's Walsh has to bring her up to speed.

"I think the only reason she's out-Chloe-ing Chloe is something that Mary Lynn said," Sackhoff said. "She's been out for a while, so you put Dana Walsh there, who knows this system, knows the people, knows the new style of the office. Everything's wireless. It's just different. It's faster, so I think for that alone, Chloe falls behind, just because she's not used to things going as fast as far as electronically."

The first night of 24's eighth season premiere reveals that Walsh has a big secret, and a mysterious caller from her past, named Kevin, threatens to expose her if Dana doesn't cooperate with him. By night two you know that Dana had a prior identity before working for CTU. Sackhoff insisted that producers let her in on the secret before signing on. 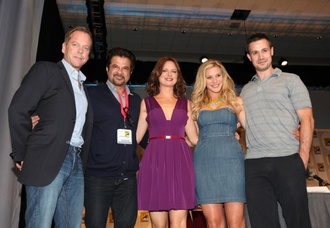 "I knew," Sackhoff said. "I did. I knew going in what Dana/Jenny's secrets were, because I really wanted to do 24 but I kind of wanted to know if it was going to be meaty or not. As an actor, when you commit yourself to something you kind of want to know where it's going to go. I had another offer to do a different show, so I think I really needed to know kind of what was going to happen. I didn't know everything. I knew about halfway through."

Sackhoff adds: "I got very good at trusting writers on Battlestar. I think that was my main reason when I was doing this, and wanting to sit down and talk with the writers and the creators and meet everybody, is because I really wanted to be able to trust them, and so I knew I had to talk to them a little bit and to see where they wanted her to go and where they saw me as an actor fitting well on the show."

Walsh is also engaged to CTU's new badass, Cole Ortiz (Freddie Prinze Jr.). Expect to see Dana look worried as Cole finds himself in a dangerous situation and the clock counts down to a commercial break. Neither she nor the audience will find out if Cole is okay until after these messages from our sponsors.

What do you think of Sackhoff's new role? Will you still watch?