Tag: Last House on the Left

Director Dennis Iliadis (Hardcore)—who helmed the remake of Wes Craven's first movie, the controversial revenge thriller The Last House on the Left, with Craven producing this time around—has made a few changes to the story and added his own touches to the shocker, which otherwise preserves the basic story of Craven's original.

A gang of escaped convicts brutalizes two young girls in an extended sequence. They then find themselves at the mercy of one girl's parents, who seek their own violent revenge.

More Last House on the Left

In Iliadis' version of the story, the main girl, Mari (Sara Paxton), is now a high-school swimmer who at least puts up a good fight. When the convicts end up at the house of her parents (Monica Potter and Tony Goldwyn), their comeuppance is elaborate and comes with the help of modern household appliances and Hollywood special effects.

Iliadis gave a group interview on Last in Beverly Hills, Calif.; following are edited excerpts of that interview. The Last House on the Left opens Friday. (Spoilers ahead!)

What was your introduction to the original Last House on the Left?

Iliadis: My introduction was a sticky VHS that I saw in a basement. The story's so powerful that the moment that you decide to do it, there's so much stuff there that you don't really have time to look back. There was a specific scene that really inspired me in Wes' film, which is what happens after they do the terrible stuff they do in the woods, where you have the feeling that time almost stops, and these people you have perceived as monsters have this moment where they're not sure about themselves. This was something that I really loved in the original, and I tried to keep that same spirit while not totally sticking to the same plot. We changed many things trying to give it a more real-time feeling, staying with the characters the whole time. That's why we cut out some, not distractions, some cutaways, like the cops and the chicken lady and all that. 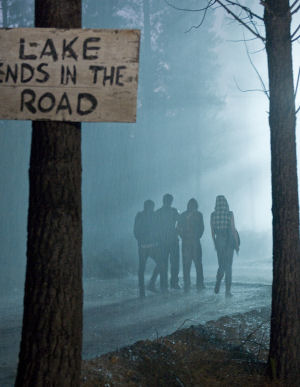 One change in this version is making Mari a swimmer. What was the idea behind that?

Iliadis: Well, the idea was to find something where she channels all her energy. That was a big character trait, because her brother is dead. It's like she's carrying him on her back; she needs to perform for two people now. She has to compensate for him. So all her energy's in the water. The only area where she feels slightly free is when she's in the water, swimming like crazy, so it's interesting having that as a character trait, and then having that as a key element for her trying to escape.

How do you make it feel like the girls have a real shot at escaping, when we not only know the plot of this movie, but we've also seen the original?

So I think having this real-time ambiguity and investing on the reality of things, I think that's what makes it so powerful. I think that's what will surprise people, because many people think they've seen it, and they know what's happening, but there are some surprises, and we've upped the suspense in some areas.

The first kill by the parents in the kitchen is so elaborate. How did you prepare and shoot that?

Iliadis: I really enjoy choreographing scenes like that, and also it's very much about rehearsal. You rehearse all the basic and physical stuff, so that performance can shine through. You don't want your actors to be worried about the technical bits. You want the characters to shine through whatever is happening. So it was really rehearsing, and the actors were really willing to get into it and get dirty and painful and all that. I mean, they did most of the fights. There's very little stunt-double work. You get good actors who are willing to get into it, and you work hard, you rehearse enough so that they can still act while they're doing all this complex stuff, and that's what you get.

Did you have any troubles with the ratings board? [The movie is rated R for sadistic, brutal violence, including a rape and disturbing images, language, nudity and some drug use.]

Iliadis: We've had problems with ratings for this. We tried to make this a bit more psychological and [a] more real-time movie where you're thrown into this situation and there's nowhere to go, but we've had a lot of problems. The basic thing they kept telling us [is] it's too real.