Why NBC's Merlin is the Smallville of Camelot

Anthony Stewart Head, who plays King Uther in the BBC/NBC retelling of Merlin, told SCI FI Wire that the series is like a Smallville version of the King Arthur story. Head plays the monarch in the story of Merlin and Arthur when they are teenagers.

"It's what would have happened if Merlin actually met Arthur when they were both young," Head (Buffy the Vampire Slayer) said in an exclusive interview last month in Pasadena, Calif. "[He has] all this extraordinary talent as a young sorcerer in a Camelot that's ruled over by pretty much a fascist who has outlawed sorcery, has outlawed magic, has basically ethnically cleansed all sorcerers and anybody who has anything to do with magic. It is the king's hypothesis that magic always leads people to the dark side. Whatever way you want to look at it, it ultimately is evil, so it should be wiped out."

The BBC series is already in production for a second season; season one premieres June 21 at 8 p.m. on NBC.

Merlin is a 13-part drama series that updates the story of the sorcerer of Arthurian legend for a new audience. Merlin is a young man with extraordinary magical powers who arrives in the kingdom and quickly makes enemies, including the heir to Uther's crown, the headstrong Prince Arthur. But guided by Uther's wise physician, Gaius, Merlin is soon using his talents not just to survive but also to unlock Camelot's mystical secrets.

Is there humor, or is it a straight historical drama?

Head: The writing is light. They've managed to find a modern style, which doesn't intrude. Having said that, it's not been easy. There have been times when there have been a few sort of anachronisms that just jarred, and we've lost them. The humor comes from the relationship between Merlin and Arthur, because there's a lot of banter and a lot of stuff that teenagers will identify with and youngsters, and also adults understand it because they watch their own teenagers. There's a relationship between Merlin and Gaius, who's played by Richard Wilson, which also has a lot of humor in it. There's a lot of humor in it, and, at the same time, there's a bit of darkness, there's a big of angst, bit of mystery, a lot of suspense. It's one of those gigs that you just go, "Why didn't somebody make this before?"

But you're not speaking Old English?

Head: No, not at all, and it's difficult. Uther is a little bit wordier than the others, but that's because he represents the old school and the old way of doing things. He rules with an iron fist, or whatever it is. Consequently, that works. Gaius, I guess, speaks a little bit more modernistically. I'm not sure, but it's light enough to be palatable, but it's not so light that you dismiss. You believe the world.

And this is the BBC model of a short 13 episodes?

Head: To us, 13 episodes ain't short. To us, nowadays, there's a director friend of mine who pitched a story to the BBC, they did it in threes. They did two episodes together, and then they did a third, and he's still waiting to find out if they're picking it up for another three. For God's sake, commit yourself, will you? For me, for the BBC to make the commitment of 13 eps was a big thumbs-up, right at the beginning. The fact that [producer] Julie Gardner was involved in it is somebody that I'm very fond of, and I think she's one of the leading lights that we have, and she's coming here. I think she's going to set up a lot of stuff. She's coming in to work with BBC worldwide, and I think they'll start to do a lot more co-production. 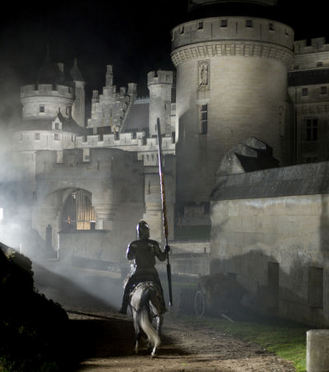 Is this designed to be ongoing, or are two seasons the limit?

Head: They've always talked about at least five, the story arcs. The bottom line is, if it's not successful, it won't go, but judging from the success so far, it's straight out of the box. It's been sold worldwide. There are only three territories, I think, that haven't picked it up. One's Iceland, one's Ireland, for some strange reason, and somewhere like Uzbekistan. They're obviously not turned on by Arthur and Merlin.

We know the history, so what's the journey of Uther until Arthur ascends the throne?

Head: There's a couple of episodes early on in the season two when I was going, "Oh, is this the line we're going down?" It's basically, "No, don't go after the servant." Stuff that we've heard from him before, but it's very brief. Then I start to get some meat. They're very open. For instance, in the first episode of season two—we're doing that now—and there's a couple of things that should be addressed. I said, "We should address them," and they've gone, "OK." They're open to stuff.

But where does Uther go? I don't know. We've talked about a couple of ideas. I've pitched something, which I think they might go with, which would be fun to play and would be interesting. He only is useful inasmuch as while he is around, Arthur can't be king. But, as I say, I only want to do it as long as it's challenging and interesting. So there will be some sort of crossover point where it'll be like, "OK, I've done it now. I've had enough." Where that will be, I don't know.

How does the visual spectacle compare to the ones you saw on Buffy? [The series shot on location in France, England and Wales.]

Head: Amazingly well. It's a place called The Mill that cut their teeth on stuff like Harry Potter, Doctor Who. ... What used to be true was if you threw a lot of money at it, you had good CGI. Then you look at dodgy effects in things that had a lot of money thrown at them. Then you look at something like this, which hasn't got a huge budget, but it's obviously got enough, because I think the CGI is brilliant. From the composite shots, a lot of people think the castle is CGI. It ain't. It's real. They only think it's CGI because these days, you're just not used to that kind of production value. You're not used to something being that big, because if it is that big, it's got to be CGI. It can't be real.

You don't have a throne room that's the length of a football pitch. There's a shot in the first ep, you'll see it. It's only a tiny little [thing], but I saw the whole shot. Eve Myles is a witch, and she turns herself into something rather attractive, obviously. She goes from a very good prosthetic makeup into this. She's with this beautiful silk dress, and [we] go down on a tracking shot with her down this corridor, this throne room, with me at the end and all these guards along the windows and shafts of light.

I said to the director, "No one's going to believe that's real, because you just don't see it these days." You don't see it unless it's on a huge film, and even then, it's probably going to be CGI, because it's easier. But it's a stunning, stunning environment. It's just an amazing location, and we never fail to find bits and pieces. Even returning to the same corridors, we've got corridors everywhere that are, like, 20-30 yards long, which you couldn't build in an interior. You'd have to put a green screen, or it used to be a mirror. You'd put a mirror on one end so it looks like a long corridor. These are real, and the light coming in is just gorgeous. It's better light than we have in England. It's that sort of really clean light that you're very used to in L.A., but it's lovely.