Why Primeval spinoff is gonna have a 'harder edge' than original

We haven't heard an awful lot since it was announced that the dino- and anomalies-filled U.K. sci-fi series Primeval was getting a North-American spinoff titled Primeval: New World. Sure, we got some awesome casting news a few months back, but now we're finally hearing from two of its main stars, who say that the show will have a "harder edge" than the original. Heck, yeah!

Actor Niall Matter, who played Zane Donovan on Eureka and who will star on Primeval: New World as main hero Evan Cross, has spoken about the upcoming new series to SciFiNow, stating that the Vancouver-based New World has a "harder edge" than the original U.K. ITV series.

"Our moments with the dinosaurs are going to be a lot more real and higher stakes. It's got a harder edge that we walk on, because every time we see these creatures it affects us in a huge way and we're never getting used to that. I feel like the original Primeval knew a lot more about the world that they were dealing with than we do."

The actor also explained how his character is the first to discover those North American anomalies by accident and how it dramatically affects him:

"He stumbles on one accidentally in 2006 when he's driving with his wife. He's not really sure what it is but he does know that it's creating radio interference so he goes to search for the source. He finds the building that is now Cross Photonics but he doesn't know he's going to buy it at that time. In that building he stumbles across one of these anomalies. In doing that, though, he loses the most important thing in his life."

Primeval: New World also stars Miranda Frigon (Heartland), Geoff Gustafson (Once Upon a Time) and Danny Rahim (Young James Herriot) and is set to air in late 2012 on Watch in the U.K. and SPACE in Canada. No news yet for a U.S. air date or which channel will air the series. 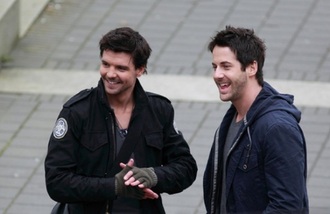 Are you guys excited about Primeval: New World?