Why the vampire film Daybreakers is the anti-Twilight

If you've had it up to your eyeteeth with sparkly swoony teen vampires, then you're going to love Daybreakers, Ethan Hawke's upcoming supernatural sci-fi horror movie.

Hawke plays a vampire in the new film, which takes the old-school approach to bloodsuckers. You know, when they actually have pointy teeth and don't talk about their feelings.

This Week in Genre History: Daybreakers lit the way for a different sort of vampire story
Ethan Hawke: Daybreakers is a subversive vampire movie

"I think what's good about this movie is it's the first post-adolescent vampire movie in a long time," Hawke said in a group interview Monday in Beverly Hills, Calif. "It's an R-rated vampire movie. I remember being a kid and sleeping over at my friend's house and staying up late and watching the Isabelle Adjani Nosferatu. Vampire movies are supposed to be secret and bad. They should be rated R."

In Daybreakers, vampires have so overrun the world that humans are in scarce quantity, and the blood supply is dwindling. Hawke plays Edward Dalton, a vampire scientist working on a synthetic blood substitute. Writer/directors the Spierig brothers satirize human environmental movements from this perspective, but it's still all about the fangs. 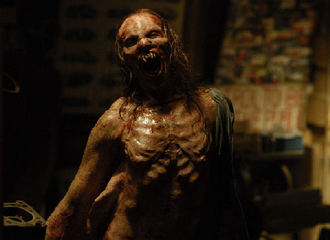 "I made a joke that this could be the number-one movie for PETA advocates," Hawke said. "It could be a huge animal-rights champion film, in a certain way of thinking. Maybe in another way, oil is the most obvious [analogy]. Sucking the blood dry. But the movie wouldn't be good at all if that's the only thing that was interesting about it. The movie works as a flat-out genre movie. It just happens to have something else at play. Gattaca was a similar way, too. It works as just a basic sci-fi movie, but there was obviously all these themes at work underneath it."

Dalton winds up fighting off vampire mutants (a nasty side effect of drinking their own blood) and teams up with a group of rebel humans who may have a better alternative to his fake blood. To Hawke, though, what makes all the fun violence work is that you care about the people, alive or undead. Actors like Hawke, Willem Dafoe and Sam Neill help sell it.

"That's the Spierig brothers," Hawke said. "They wanted us. That's the kind of actor they wanted. I mean, go figure. A lot of these kind of people who make these kind of movies, they don't care about the acting. They're so interested in their shot or their thing, and they just want somebody to do this thing. Claudia [Karvan]'s a very accomplished actress as well. And even the young people, Isabel [Lucas] and Michael Dorman, are incredibly good. I always think that that's what makes a good genre movie. Obviously the movies aren't really oriented around performance the way that a movie like Before the Devil Knows You're Dead is, but if at least the acting doesn't stink, it goes a long way. I mean, Wesley Snipes is great in Blade. The first one, he was awesome. That's what separates it."