Why the writer calls Orphan 'Hannibal Lecter with pigtails'

David Johnson, writer of the upcoming horror film Orphan, told SCI FI Wire that he liked re-imagining the "evil kid" subgenre as much as he did exploring its conventions.

"I feel like it's mainly opportunity, because the first thing I thought of was 'Oh, the evil kid subgenre. I love that. I'm going to rent every single one of them,'" Johnson said in an exclusive interview Sunday at the Fangoria Weekend of Horrors in Los Angeles. "[But] for being a full-blown horror subgenre, it's a really tiny number of movies compared to, like, say the number of zombie movies that came out in the last five years. There's the pre-existing idea of the subgenre, but I think that there's still a lot to be done."

Orphan stars Vera Farmiga (The Departed) and Peter Sarsgaard (Jarhead) as parents who adopt a child (played by newcomer Isabelle Fuhrman) only to discover that there's something strange about her. Johnson spoke exclusively with SCI FI Wire before a panel discussion at the Weekend of Horrors, where he and director Jaume Collet-Serra (House of Wax) screened clips of Orphan and talked to fans about the film. The following is an edited version of that interview. Orphan opens July 24.

David, can you provide a little setup for the film?

Johnson: It's about a couple. They have two children, they are trying for a third, and the wife has a horrible miscarriage and is unable to have any more children. They have created this place in their family, this place in their heart for a child, and it feels like something's missing, and they decide to adopt an older child, someone who needs them. They're looking to find someone that needs a home, and they sort of open their family to her, and she turns out to not be what they thought she was and exploits the opportunity that she's given.

Where did the idea for this originally come from?

Johnson: It's kind of hard to describe without telling too much about the story, but originally a guy named Alex Mace came up with the story. He wrote like a 10-page treatment, and it was just sort of like the introduction to the story, and I'd always had a penchant for [movies like] The Bad Seed—the evil kid sort of subgenre. So I was really turned on by that, and I really just wanted to try and find a way to do the evil kid genre in a way that would seem fresh. I went in to them with the idea, and they took it and they let me finish the story.

Was there one or two of the "evil kid" movies that was more inspirational than the others, even if it was one that wasn't done well that gave you ideas to improve upon?

Johnson: I think The Bad Seed is the quintessential evil kid movie. I mean, it casts such a long shadow. You can't get away from it, so of the group [of films], that was the one that sort of inspired me years ago when I first saw it. This is kind of off the wall, and not necessarily a direct connection, but also watched Shadow of a Doubt, because the thing about the evil kid is it's part of your family. It's not like there's a guy in a mask trying to break into my house and kill me; it's like, what if the person that's trying to kill me is good old uncle Charlie sitting across the table from me? So that kind of paranoia inside a family, inside a household, really was more of a direct inspiration than one particular evil kid movie. 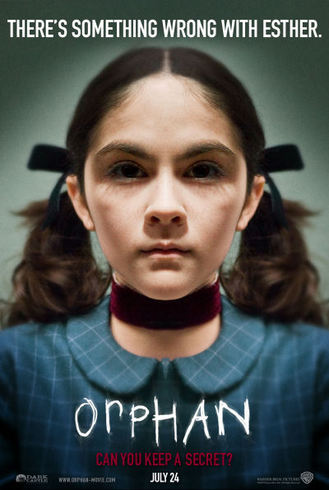 As a writer, did you have to tailor it stylistically to what is commercially viable, such as making it more violent or graphic, or were you able to design the film according to your own interests or tastes?

Johnson: There wasn't any indication of trying to make it commercially viable. If some of the extreme, graphic stuff out there did anything, I think it wasn't that we were trying to do something like that, but it definitely set the limits way out there. So you can do something that's crazy, and you're not going to do anything that's near as crazy as the stuff that's out there. I think one of the things that's probably unique for an evil kid movie like this is I think it does go a little bit further than a lot of them have. I love The Bad Seed, I love Rhoda, but she's a cute kid with a penchant for pushing old ladies down stairs, and Esther is more like Hannibal Lecter with pigtails.

Did you think about the way this film was going to be executed, such as if it were gothic or visceral or subject to a certain visual style?

Johnson: I definitely had that in my head, and that gothic sort of feel was in my head. The first time I saw Jaume's visual treatment for what he had in mind, it was like he was inside my head. It was really great.

In terms of the characters, how much of this do you conceive fully and how much do you leave unspecific so that the actors can come create their interpretations of them?

Johnson: To me, it's such a collaborative process, and you know that people are going to come in and bring their own things to it. What I want to do is make the script its own thing, and for me it's an end in and of itself. So I don't tailor things specifically to people, because I have no idea what they're going to come to the table with, and I think it's for the best, because all of the actors came into it with their own thing, and I think they improved everything in ways that I couldn't have possibly imagined.