Why tomorrow's Doctor Who premiere is the best yet

Is anyone approaching tomorrow's Doctor Who premiere with trepidation? A better question might be—is anyone not?

After all, season five marks a huge change in the show: The Doctor, besides being brand new, is now being played by Matt Smith, the youngest person ever to take on the role. Not to mention that the man who breathed new life into the series, Russell T. Davies, is gone, replaced by writer Steven Moffat. It's enough to worry even the most rabid fan.

Well, stop worrying. BBC America screened the episode for the press earlier this week, and I've seen it (along with half the Internet, since the BBC is three weeks ahead). "The Eleventh Hour" is definitely the best season premiere of the new series to date. My evidence? These four brilliant moments …

(Beyond here there be spoilers. Big time.) 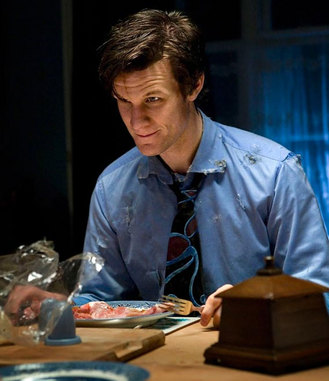 When the Doctor first meets his new companion, Amy Pond, she's 8 years old and he's in the midst of a post-regeneration crisis. He asks Amy, who's alone in her house, for virtually every kind of food she has before finding something he likes. The scene is a tour de force of comic timing and clever editing, and Smith delivers a lovably bonkers performance here. Then, in a heartbeat, he goes from playful to serious when he takes it upon himself to investigate a scary crack in a wall in Amy's house. Mastering that transition—from fun to urgent—is a trait of the very best Doctors (Tom Baker, David Tennant), and Smith really nails it. 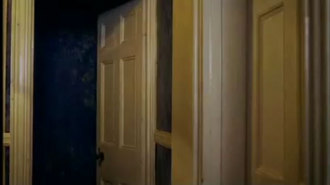 Once the Doctor realizes someone—or something—has come through the crack in the wall, he gets distracted by an emergency with the TARDIS outside and runs out of the house right by a closed door. When Amy goes back in, the door is open. It's a simple, brilliant "holy sh-t" moment, the kind of writing Moffat is known for. This is definitely the same guy who five years ago had us on edge with a small boy just uttering, "Are you my mummy?" 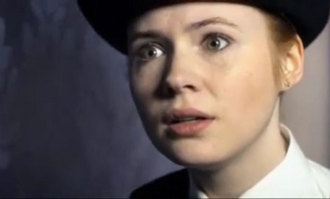 The first time we see Amy as a grown-up, it's a shot of her legs. In silk stockings. Which are part of a sexy policewoman costume. Yes, this isn't your dad's Doctor Who (though he'd certainly appreciate this scene). While the image is tantalizing, it's not overdone, and the scene quickly goes in a different, unexpected direction. Still, you feel that something's up, and when Amy finally reveals at the end of the scene why she's dressed that way, it all comes together. It makes for a memorable, sexed-up entrance that the show completely gets away with.

4. The clips of previous Doctors

Ordinarily, I'm a big opponent of using clips of previous episodes in shows (I'm still fuming over Deep Space Nine's finale). The onscreen reasons for doing them are usually painfully contrived, since often they're thrown in because of misplaced nostalgia. However, the climax of this premiere, which sees the Eleventh Doctor walk through a giant hologram that's just been displaying the faces of Doctors One through Ten … well, there's no other word but "electric." By this point, Smith's already won you over with his performance, and the sequence feels like a coronation: "Nice work, kid. Here are the keys to the TARDIS. You've earned 'em." Yeah!

For the latest sci-fi news, follow us on Twitter at @scifiwire
Tag: Doctor Who
Tag: Matt Smith
Close Search Return to SYFY homepage.