Why Trek's Wheaton got a little Leverage

These days Wil Wheaton has been playing a lot of bad guys. The actor, well known for his role as Wesley Crusher in Star Trek: The Next Generation, has been taking on some very dark parts these days on crime shows like CSI, Criminal Minds and Numb3rs.

So what are you supposed to think when you see Wheaton with a beard in TNT's hit series Leverage? "If it had been a goatee, I think it probably would have given it away too soon," Wheaton said with a laugh.

Leverage is an action series about a crew that cons and steals from corporate and government bad guys to help average citizens who can't help themselves. Wheaton guest-stars as Chaos, a computer expert who is part of a talented crew of thieves who go head to head with the Leverage crew in Wednesday's episode, "The Two Live Crew Job," which premieres at 9 p.m. Griffin Dunne, Noa Tishby and Apollo Robbins also guest-star.

"If last season is about these guys being like the Justice League, and they're like almost superheroes in their skills, this season we're seeing them run up against real problems, and we're seeing jobs go wrong, and we're seeing them have to adjust midstream to account for things they didn't anticipate," said Wheaton in an exclusive interview with SCI FI Wire last week.

"I love the idea of being part of a rival crew," Wheaton said. "It was great for me to play this computer hacker character, because I've been using computers since 300-baud modems were standard, ... so getting to play a character who kind of reminds me of some of the guys I used to know back in the old days was really a lot of fun." 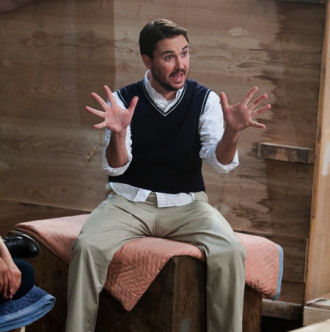 While there's no doubting the rival crew are no saints, Wheaton sees his character as taking a break from his recent dark roles. "The last couple of years have been really wonderful," he said. "I've been able to play pretty much a string of bad guys. One of the things I really liked about playing Chaos in Leverage was being a bad guy, but it's not a dark, evil, certainly not a serial-killer-on-Criminal Minds bad guy. There's a wonderful lightheartedness to Leverage that balances out some of the darkness in the things that they're all doing, getting to be this character who you would definitely think is on the wrong side of the good-versus-evil kind of battle, but I made a deliberate acting choice to make Chaos a guy who relishes the challenge. Who comes up against Hardison and is like, 'I have finally met an equal,' and is so excited to be there."

According to Wheaton, you'll have to watch to see if the rival crew leaves an impression on the Leverage crew. However, he has hopes that Chaos might return someday. "I really, really hope that sometime in the next season our crew shows up again to make life difficult for the Leverage crew."

While Leverage isn't strictly sci-fi (though it has elements), there is no denying that Wil Wheaton will always be a part of the sci-fi community, thanks to his work on Next Generation and his more recent roles in animated shows such as Batman: The Brave and the Bold and Ben 10: Alien Force. "When I got to work on Batman: The Brave and the Bold, I got to do the voice of Ted Kord, who is the Silver Age Blue Beetle. He's one of my all-time favorite comic-book heroes and is up there with Batman and Hal Jordan's Green Lantern as some of my absolutely favorite comic-book heroes," he dsaid. "Getting to create the voice for Ted Kord, I didn't know at the time, but I'm the first actor to perform Ted Kord. Like, really, it was a really big deal for me."

And it looks like Wheaton hasn't quite left Star Trek behind. "I have a bunch of books that are coming out in about the next six months," he said. "I've got a book called Memories of the Future that will be released very soon, and it's my humorous Star Trek episode guide. Because I was on Next Generation when I was a teenager, it's very much like my high-school yearbook. So if you ever pulled the yearbook off the shelf and cringed at some things and laughed at other things and fondly remembered other things, that's what this book is like."

According to Wheaton, Star Trek will always be an enormous part of his life. "Star Trek is more than just a television show," he said. "It is part of a lifestyle, and it is a generational phenomenon. Being part of Next Generation is like being part of hundreds of thousands of people's childhoods. It's one of those things that is, if I think about it too much, the enormity of it is kind of like overwhelming and freaks me out a little bit. So I try to focus on being part of telling great stories that I really loved and being part of a cast who I'm still close to and getting to be part of something that brought parents and kids together. That was a huge part of people's lives."