Ronald D. Moore told SCI FI Wire that all is not lost when it comes to Virtuality, his proposed Fox sci-fi series, for which a two-hour pilot was shot but not picked up as a series when Fox unveiled its fall schedule last month. Instead, Fox will air Virtuality on June 26 at 8 p.m. ET/PT, billing it as "an original science-fiction thriller movie," suggesting that the network wants to burn off the pilot in the middle of summer.

Not necessarily, Moore said in an exclusive interview on Wednesday. Fox executives have never said "It's over," leaving Moore hopeful that strong reviews and stronger ratings will convince network executives to move forward with a series.

Virtuality—which Moore produced with fellow Battlestar Galactica alumnus Michael Taylor—follows the crew (including Nikolaj Coster-Waldau, Sienna Guillory and James D'Arcy) of the Phaeton, a ship on a 10-year journey through space. To help pass the time and relieve stress, the crew members enjoy the benefits of a virtual-reality system, but things take a dark turn when a virus taints the program. Oh, and did we mention that everything happening on the Phaeton is being filmed and aired back on Earth as, yes, a reality show?

Following are edited excerpts from our conversation. Note: Possible spoilers ahead.

This movie was meant to be a pilot. So you finished it, handed it to Fox and what happened next?

Moore: Well, [Fox entertainment president] Kevin Reilly's first response was, "I love it, and if this was a movie, I'd put it straight to DVD right now and release it, and it'd do big business. It's a great movie. But as a pilot, I'm not sure." He wanted to tinker around with it a little bit, and we played with variations on it, until we all got to a version we were happy with, and that was the version that Kevin took up the line to the rest of the people at Fox.

And ultimately I think the communal reaction was that they were impressed by the production value of the show, they were challenged by the story material, and they just didn't know if it was going to work on the Fox network or not. They haven't officially said, "That's it. It's over." You never know how these things turn out, but at the moment I think Fox's attitude is probably wait and see.

How did the shoot go?

Moore: It was good. It was a very complicated shoot. It was juggling the three elements [the crew's mission, the virtual reality and the reality show] simultaneously, so we had to shoot enough footage to always have enough stuff that would play as the surveillance cameras and first-person confessionals, for the cast members to talk as if they were going into the confession room at the Big Brother house or something. So you had to have a lot of material to serve a lot of different purposes.

And the virtual stuff, we committed early on in the process to do it in CGI for almost all of it. Those sets were almost entirely green-screen sets, and we repurposed a video-game technology that my visual-effects supervisor was intrigued by as a way of doing cost-effective virtual effects. So it was a very complicated shoot with a lot of moving pieces. It was really fortunate that Peter Berg [Hancock] was the one who came in to direct it, because he was really able to juggle all these things simultaneously.

Did you alter the ending? Did anything change as a result of Fox choosing to air it as a movie versus them calling it a pilot and airing it as such?

Moore: No. To me, this will always be a pilot. I know that Fox calls it a movie, but this is a pilot. It ends with the setup for a series. That's how it should be viewed. 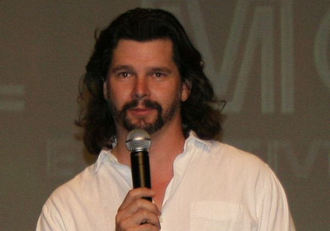 And if it actually does go to series, what kinds of stories would we see on a weekly basis?

Moore: I think they would be extensions of what you see in the pilot. We would be following all of those storylines. The green-eyed man [Jimmi Simpson] is obviously a big player, and what's his connection to what's happening in the virtual world? Is there a connection between him and events in the real world? The biggest mystery of all is "Well, what happened to Pike [Coster-Waldau]?" What did Pike see in his vision? Did he have a foreboding? Did he know what was going happen to him in that airlock? Is that part of what he saw in his vision? Did he start believing in the reality of anything that was happening?

I think some of the fundamental questions on the show go to things like "What is real? What is not real in this story? What is manipulation? What is not manipulation?" If we went to series we would continue to explore that, and we'd play different characters starting to unravel different mysteries. What are they telling them from Earth, and is that true? Are they just being paranoid? Is somebody aboard manipulating their messages, the virtual reality? There are a lot of mysteries and certain interesting things that were set up that we would continue to play if the show went to series.

You also shot webisodes for Virtuality. What were those, and what's going to happen with them?

Moore: They were pieces of the reality show itself. We cut together a group of, I think, five or six webisodes that were essentially like watching the reality show on television. The idea was to put those on the Internet and let the audience build interest in the show as well. If the show had gone to series we were going to continue that as a very strong component. The reality series that you'd see week to week you would be able to watch as a series almost on the Internet at the same time, which I thought was really interesting. Studios and networks are constantly looking for ways to pull the audience across both lines, that there's some kind of Internet component to an existing television show.

Galactica, we did those two runs of webisodes. I liked them. I thought they did pretty well, but it was a very constrictive format that I didn't think was very creatively fulfilling. But when we discovered this approach to say that the reality show itself would be cut and produced and shown as a piece of business on the Internet, I started to think, "Wow, that's really great," and I could get into the idea that there'd be a really strong Web component. Last I heard, Fox was still trying to figure out when and where they would show this on the Internet. And I hope they do. I think if people could see the whole package of the show, the Internet component, and see where the mysteries could go, it would be great.