The main characters in SCI FI's upcoming Warehouse 13 are FBI agents guarding supernatural artifacts, but their inspirations have more to do with classic romantic comedy stars such as Cary Grant, Myrna Loy and Katharine Hepburn, the series' executive producers said.

Warehouse 13 pairs the reluctant agents Pete Lattimer and Myka Bening and assigns them to track down and retrieve ancient and powerful artifacts scattered across the globe before they fall into the wrong hands.

In a conference call, executive producers Jack Kenny and David Simkins told reporters that the action adventure has its antecedents in part in the screwball comedies of the 1930s and '40s and that the actors had a say in how their characters were created.

The following Q and A features edited excerpts of the Kenny and Simkins interview. Warehouse 13 debuts on July 7 with a two-hour pilot at 9 p.m. ET/PT.

Could you tell us what were some of the initial writing/production challenges in getting Warehouse 13 off the ground?

Kenny: Any new series involves similar challenges, such as where "We are going to go? Are we going to arc out the first season, or is each episode going to be individual? And what [are we] learning about these characters and these people?"

One of the things is we brought [the stars] Saul [Rubinek], Jo [Kelly] and Eddie [McClintock] into the writers' room, all sat together, and we had a session. And we talked about the characters. We talked about them personally: What do they like? What do they do? What are their hobbies? Do any of them speak languages or play instruments? You know, what are their relationships with family members and things, so that we could mine who they were as individuals.

Because my approach has always been that every show I've ever done is a family show, whether it's a workplace comedy or an actual family show, and so in building this family of this brother, sister and father team that we've got going, we wanted to sort of bring who they were to the roles. ... 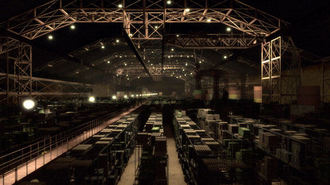 As soon as they arrived at the Warehouse, it was reminiscent of the warehouse in Indiana Jones or the scenario in Men in Black. Were either of those inspirations for this?

Simkins: I wouldn't say so much inspiration as opposed to just touching upon cultural and dramatic touchstones. Jack and I, in going back and sitting with the characters, and with the characters in the writers' room, we talk a lot about the Thin Man series, Myrna Loy, William Powell, Cary Grant, Katharine Hepburn and Spencer Tracy.

It goes far beyond the more sort of recent aspects. We're really digging into those, past those, beyond those, and looking at real good basic storytelling archives that we can constantly reflect on and occasionally use to help us tell a story.

I think what you're talking about, though, is in those kinds of relationships, and those kinds of settings, is just the friction. The story to me with characters like Pete and Myka, the story of those characters always lives in the space between them: What they believe at a certain moment or a potential betrayal or a revelation of a hidden secret. Those things play in any relationship, whether it be in Men in Black or Indiana and Marion. They're really, really right avenues to explore. So I would say, in answer to your question, a little, but not really. ...

Do you feel you've got the kind of freedom to make this long mythology?

Simkins: Whereas Battlestar Galactica, a terrific show, was a very densely plotted [show], heavy in the myth and heavy in the—and I mean this in a good way—in the soap-opera aspects, in the best use of that term, we're doing more stand-alone episodes.

I don't want the idea of this 13th warehouse to feel like I'm going to need a history book to enjoy the show. These are colors that we're layering in onto the series just to give it a sense of reality and a sense of depth should someone go looking for that depth.

But, for the most part, you can come to it—I hope you don't—but you can come to it in episode three or four or seven and still really have a great ride. You won't have missed much, if anything. There's a couple of B plot runners that we're running through the series, but for the most part, when you tune in, and there's Pete and Myka and they're going off on a mission, you'll get it. It's pretty accessible.