Quentin Tarantino's latest film, the World War II action satire Inglourious Basterds, doesn't seem like something we should write about, but it is: As the film unwinds, it becomes apparent that it's all taking place in an alternate universe. Or, as star Eli Roth calls it, it's a "fairy tale." With Nazis.

We won't spoil which major events are different in Tarantino's world, but when you notice events diverging from reality, the director has a solid explanation.

"You can definitely say, 'Look, there is a point in the movie that history went one way, and we go another,'" Tarantino said in a group interview last week in Beverly Hills, Calif. "Now, where I'm coming from that is basically my characters changed the course of the war. Now, that didn't happen because my characters didn't exist, but if they had existed, everything that happens is fairly plausible." (Spoilers ahead!)

Tarantino's "Basterds" are a group of Jewish soldiers who hunt Nazis. He also invented Nazi war hero Frederick Zoller (Daniel Bruhl), a sniper who killed 300 Allied troops with his rifle while holed up in a lighthouse. The Nazis made the propaganda film Nation's Pride in his honor, starring Zoller himself. Both Hitler and Goebbels themselves attend the film's premiere.

The writer/director came up with this plotline after scrapping his first draft. "I had a different story, and it was just too big," Tarantino said. "It was just too big. I had the opposite of writer's block. I couldn't stop writing. I couldn't shut my brain off, and I literally said, 'OK, I'm going to take out this story because that's the thing that derailed me way back when,' and I came up with a new story. The new story is the one about Frederick Zoller, about him being this German Audie Murphy character. He gets a movie about him, and the mission would be the blowing up of the actual premiere." 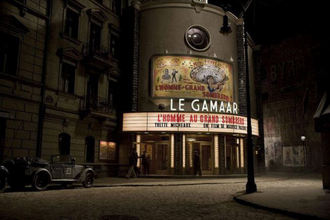 Were Hitler and Goebbels actually in attendance at the premiere of Nation's Pride, had the film or its subject actually existed, perhaps the Allies would have sent some "Inglourious Basterds" after the Nazi gala. Tarantino's filmmaker friend and the film's co-star, Eli Roth, shared his perspective on the alternate history.

"It's a work of fiction, and he's not constrained by the rules of history," Roth said in an exclusive interview later that day. "By making the movie not historically accurate but making the characters honest and accurate, by having them speak in their native tongue, the characters are much more human and much more relatable. In the story, it leaves you free to draw your own conclusions, to draw your own associations to it. Quentin's an artist. He says this is a fairy tale. 'Once upon a time,' and that's it. It's so much fun. It allows you to really just enjoy it and experience that and get that thrill of experiencing that. It's something that everybody's thought of."

Hindsight indeed gives victims of tragedy thoughts about how they could have thwarted such events. Filmmakers are no exception.

"It made me think about after September 11th, how I had fantasies of going back in time and being on those planes and killing those hijackers," Roth continued. "I think that Quentin has actually tapped into something very, very real, which is this human wish to go back in time and sacrifice yourself to stop evil and save thousands. That's a very, very real thing."