Since ABC's FlashForward returned with the second half of its season, it's been hard to pin down: Some elements and characters seem to work and are fascinating, like Demetri and Simon. Other elements and characters are less compelling and just aren't as convincing. And it almost seems that for every episode with promising possibilities—like the recent two-hour "Revelation Zero"—we get "Blowback" the next week and wonder why we bother watching at all.

Luckily, Thursday's "Better Angels" episode offered up some intrigue, action and one doozy of a cliffhanger. Still, the episode embraced all that's both right and all that's oh, so wrong with FlashForward—and managed to do it all in an hour.

Most of the forward narrative came from a trip Simon, Demetri, Janis and Vogel took to war-torn Somalia to check out the 1991 event that killed crows and blacked out a village, leaving little evidence behind except a tower behind. The team runs into a vicious warlord named Abdi (played fabulously by Owiso Odera), who knows all about the 1991 event because from a hillside as a child he saw his entire village pass out. The man, who's become a leader and tyrant over his people, isn't about to let the team off easily by just popping over to the tower to check it out. He knows more is going on and doesn't believe they are relief workers. Abdi wants answers. 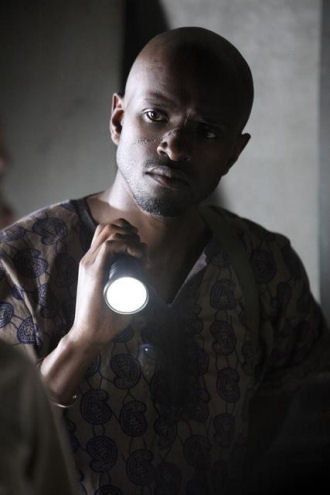 While Abdi is busy killing off the redshirts of Vogel's team, Janis (Christine Woods) finally gets through to the warlord, convincing him that he is going to bring peace and not war to his country, based on his flash-forward. Abdi lets them into the tower, which hasn't been entered since 1991, and Simon (Dominic Monaghan) admits that the tower is his exact design, the one he invented in 1992. They also discover videos of the villagers talking about seeing visions two weeks into the future after their blackouts. Abdi is hopeful that his missing mother might still be alive, until they find a mass grave of the murdered villagers locked deep within the tower, Abdi's mother among them. Vogel (Michael Ealy) is forced to kill Abdi to save Simon, who Abdi believes is responsible for the entire thing.

As MTV.com's Josh Wigler wrote, sometimes it's best to "stick around until the very end of an episode." The coolest cliffhanging moment in a long FlashForward time comes in the tower when a monitor pops on and we and Demitri (John Cho) hear "Hello Demitri."

As Wigler states, "With those two simple words, D. Gibbons—also known as Dyson Frost (Michael Massee)—cemented himself as a bad guy to watch and reinforced why Demetri is the most interesting character on the show. Dem is supposed to die in a matter of weeks, he has no flash-forward to speak of, but he's deemed important enough by Gibbons to receive a message recorded all the way back in 1991? Sounds like a lot of build up for a guy who's predicted to die in a few episodes." 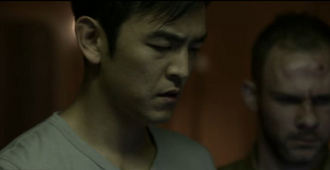 "Dyson Frost's ability to see into the future has become a pretty neat trick, and probably the most 'Sci Fi' thing about this series thus far," adds IGN.com's Matt Fowler. "We're still not sure why he was testing out tachyon bursts on Somalians, but he did use the term 'consciousness shift,' which is the first time the show has really let us know that the reason for the blackout was to bring about future visions; meaning that they weren't just a side effect of some catastrophic accident."

It was a great moment for the show that kind of made up for all the home stuff. Yes, we finally discovered that Charlie's flash-forward involved not so much D. Gibbons and his bad man status, as it did that she overhears two men in suits who (for some silly and inconceivable reason) are in her backyard saying that "Mark Benford is dead." That, of course, would traumatize a young child and presents all sorts of questions, since Mark (Joseph Fiennes) wasn't dead in his FF. It gets even more interesting when we discover that Vogel is one of the men in a suit when we see his flash-forward.

So while the Charlie stuff has some interest FlashForward-wise, Olivia (Sonya Walger) has decided that they all need only to move to Denver to solve all their problems. Mark, of course, is too bent on staying with his case to consider that maybe his family is more important than his job.

The ABC.com discussion area lit up with the pros and cons of Olivia's ultimatum and Mark's unwillingness to take the offense of leaving town. "Why can't Mark go to Denver with Olivia and work remotely from the Denver office?" wrote 27sparrow. "He could fly into LA every once and a while if he needed to. Who knows what Mark's thinking? He's always making awful choices. Like Vogel said, he's 'erratic, irrational, and frequently stupid'."

But here's the real problem with FlashForward and why some viewers are really having trouble investing in the series up to this point, according to the A.V. Club's Todd VanDerWerff. "I will never understand why more people on this show haven't done EVERYTHING POSSIBLE to make sure the flash-forwards they insist they don't want to happen DON'T HAPPEN," he wrote. "My understanding is that in the original book, there's a scene where a man who's always wanted to be a writer kills himself immediately after seeing that he won't be a writer in his flash-forward. Knowledge in a show like this is only good insofar as it's used by the characters to do things or further their own goals. On FlashForward, knowledge is often just another bargaining chip."

What do you think? FlashForward airs Thursdays at 8 p.m. ET/PT.