Why you should care about the Watchmen companion DVDs

Watchmen director Zack Snyder told reporters that he had a strong hand in the development of the companion DVD/Blu-ray releases tied to the March 6 theatrical release of his adaptation of Alan Moore and Dave Gibbons' classic graphic novel, as did the cast of the movie, who ad-libbed in character for a mockumentary based on the film.

Snyder also offered new details about the upcoming releases: Watchmen: The Complete Motion Comic, due March 3, and Tales of the Black Freighter, an animated short based on the popular pirate comic book from within the Watchmen world, due March 24.

The motion comic includes the complete 12-part iTunes version of the graphic novel. Black Freighter stars Gerard Butler as the voice of the captain.

Snyder is planning an ultimate cut of Watchmen that will integrate Black Freighter into the film, but you can see the short by itself first. Also in the Black Freighter package is Under the Hood, a mockumentary about Hollis Mason's costumed-avenger memoirs, which features much of the film's cast.

Snyder and Gibbons spoke with a group of journalists on Friday in Beverly Hills, Calif., about the companion discs. The following Q&A features edited excerpts from that interview.

How involved were you in the DVD spinoffs?

Snyder: We were pretty involved in The Black Freighter. Eric [Matthies] basically spearheaded the Under the Hood mock documentary. Because he was doing the [electronic press kits] and all the behind-the-scenes stuff, he put together this proposal. It's basically a TV show called The Culpepper Minute, which is a magazine show that started in the '70s. ... When the original book Under the Hood first came out, they did a story on it. This is supposedly a follow-up story to their original story, like a "Where are they now?" kind of thing. So they interview all the cast in character that they can. I think the Comedian [Jeffrey Dean Morgan] is like, "Get that f--king camera out of my face."

Can you talk about making these more than just straight-to-video gimmicks, but rather authentically Watchmen properties?

Snyder: Especially that piece is, because they have access to all the cast. All the cast basically had done a ton of research because they had to ad-lib the dialogue, because it's [an] interview. Carla did an amazing job, because they have the original interview of her. So she's, like, in her early-'70s look, and she had just done all of her research, so she had it so she could kind of talk about the rape allegation. It's pretty interesting. Then Steve McHattie [who plays Hollis Mason in the movie], of course, they interview him like they're in the Gunga Diner doing the interview. That's where the interviews take place, and I just feel like, after so much work that these actors put into researching their roles, they were actually able to pay off that research with these ad-lib experiences, which was cool. Then they also shot this historical footage; like, they take Hooded Justice, they get a Bolex [camera] and go down some alley with some "vintage" cops, and they shoot some handheld scratchy footage of him arresting someone.

Gibbons: It's really good to hear that there are the same elements attached to the movie as there were in the comic book. Not everybody used to read the text pages in the back, but if you do, it really enriches the experience of reading the comic book. From what Zack's saying, that's going to be the case with this. I've only seen the trailer of the Black Freighter stuff, and it's not in the EC horror comics style that I did, but it does look scary. It does look terrifying, and it should be. It's only the short trailer, but, again, I notice a few of my panel compositions have crept in there. I do like the kind of gaudy horror of it all. You seem to have captured that. 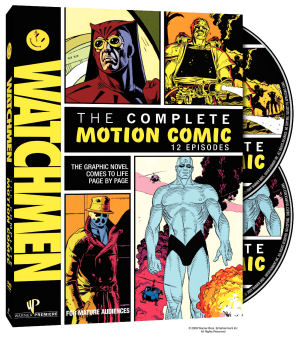 How will the final extended version integrate Black Freighter? The comic book had it intercutting with scenes from the main story.

Snyder: It does that a little bit. Not as much as I would have liked, to be honest, but because most of it's bookended by the Bernies [characters at a New York newsstand]. I feel like it does kind of flow and go in and out in kind of a nice way. We did these things where when the kid's looking at the comic book, we drive into a frame, and it starts to animate, so there's cool stuff like that. I had wanted to be either Rorschach's [Jackie Earle Haley] voice over a picture from Black Freighter or hearing Gerry talking over it. It does have a little bit, but I think it could have been a little bit more. It's one of those things that when you're designing the movie and you're kind of sneaking this thing into it; it's a little bit difficult to engineer these scenes for the film that can kind of do both. One's going to compromise the other in some ways.

Are Bernard and Bernie on the short film, or just in the ultimate extended cut?

Snyder: It's just for the extended. It's not even really in the director's cut, either. It's actually just for the Black Freighter version.

Snyder: It's he and the newsstand kid, I would say, more than anything. The Top Knots are there knockin' around, gettin' mad. They don't like that he's reading a comic book. We did little bits, even though it's maybe not in the comic book, where Hollis Mason is buying a magazine, just trying to bring characters from the outside world [to] sort of pass through the newsstand to make it feel like a community of characters. It's also kind of interesting, maybe, and fun that an audience would get an opportunity to expand the world and feel like it's living and breathing even more than just a straight linear movie would do. I think when you're in the movie, we really don't have a lot of time to f--k around. You've got to stay on point, and you've got to keep going, because time is so critical, so it's kind of fun to have the Black Freighter version where it is pretty luxurious.

The motion comic is 325 minutes. Could the movie have been twice as long?

Snyder: I mean, if you watch it, if we shot it panel for panel, that's what it would have probably been, six and a half hours. And that's not taking into account dramatic pauses by actors doing dialogue, which they tend to do. I think at least six and a half hours long.

Gibbons: That is the actual running time of a literal translation of Watchmen. Paul Levitz at DC showed it to me to see what I thought about it. I thought, "Well, I don't think we really need this." So I said to Paul, "If I really don't like it, is it likely to get made anyway?" And he said, "Probably." So I said, "Well, OK." I showed it to my teenage stepdaughters, and they went crazy. They said, "This is great. This is fantastic. Can we see some more of it?" So I kind of changed my mind about it, really, just on their enthusiasm. Certainly I was involved in it as a consultant, so I went through the script with them, and they'd show me the animated and the rough animation. It's a tremendous feat of cutting all the foregrounds out and extending the backgrounds and resizing it, but on an iPod it looks brilliant. The reason why, I think, is because the panels are kind of exactly the same size as in the comic. So it's like isolating a panel and watching it move.

Does it have the original ending, with the squid?

Snyder: It's exactly the book. It's just the book.