Why you shouldn't ask Terry Crews about Terminator Salvation

Terry Crews—the father from TV's Everybody Hates Chris and the president in Idiocracy—was proudest of his role in McG's Terminator Salvation.

What, you don't remember him?

Terminator timeline: We try to make sense of the futures past
Christian Bale says Terminator Salvation is 'a great thorn in my side'

That's because his role, short as it was, was almost cut out of the film, except for the kicker: There's a shot of Crews as a corpse.

Crews—who had been talking about the movie for months and even confirmed Arnold Schwarzenegger's much-rumored cameo in the film—wasn't even told his role had been cut and didn't find out about it until he screened the finished film. As you can imagine, he's not too happy about it. 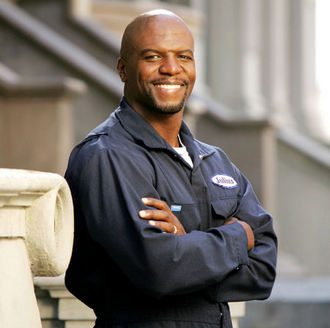 Terry Crews in Everybody Hates Chris

"The problem, where they messed up, is that they had me laying there dead, and the whole movie, everybody was wondering what that meant," Crews added. "And it didn't mean anything, because originally it was just a cameo. And I thought, that's the last time. You have to be careful who you trust things with. You know what I mean? You don't have to do everything, but I trusted them, and that was wack. And it was pretty bad, and I was like, apparently they didn't think I had a base or whatever, but you can look at your movie, and look what happened."

Still, Crews insists he's not bitter. "But I'm like, 'Yo. I've got to explain this thing to everybody every five minutes,'" he said. "I mean, you know, what do I do to my fans? And I'm a trouper, you know? It's all about the film. It's all about what's going on. But not good. But, again, that's Hollywood. What can I say?"

Crews blamed the situation on too many cooks. Back in the day, "really, just one guy ... would decide what the movie is going to be about, but now you have movies by committee," he said. "That's what happened with Terminator. I ended up as a corpse in the movie. It was committee. And it was like, 'What was that?' I was like, 'Why didn't you just cut me all the way out?' It was disappointing."