Why you won't see rape and murder in Jackson's Lovely Bones

The key event in Alice Sebold's novel The Lovely Bones is the rape and murder of 14-year-old Susie Salmon, but in adapting the book to film, director Peter Jackson had several reasons for toning down the violent incident that sets the story in motion.

In the movie, we do not see any rape, and the murder is mostly implied. "There are artistic and there are moral reasons and there are practical reasons," Jackson said in a press conference over the weekend in Beverly Hills, Calif.

Among other things, depicting the violence would immediately get the film an R rating. "We wanted to make a film that teenagers could watch," Jackson said. "[Co-writer and producer] Fran [Walsh] and I have a daughter who's very similar to Susie's age. We wanted Katie to be able to see this film. There are a lot of positive aspects of this film, and it's not something that I think I wanted to shield our daughter from. So it was important for us to not go into an R-rated territory at all."

There were also artistic reasons. An on-screen depiction of such violence could overpower any of the film's other themes. "Also, I never regarded the movie as being a film about a murder," Jackson continued. "Yet if we shot any aspect of that particular sequence in any way, then it would stigmatize the film. Movies are such a powerful medium—with the music and the effects and acting and performance, the editing and the lighting and camerawork—that to show a 14-year-old girl being murdered in any way, even regards no matter how briefly, it would completely swing the balance of the movie."

With an implied murder, the viewer can focus on Susie's quest to let go of the living and move on as a spirit, Jackson said. "The movie that we did make, it was almost like a mystery, a crime mystery, of what happens when you're in this world of the subconscious, the world of the afterlife," Jackson said. "Susie has to deal with the mystery of what happened to her. There's a positive aspect to it in the sense that she's immortal and saying there is no such thing as death. All of those aspects and themes were what interested us, not the murder." 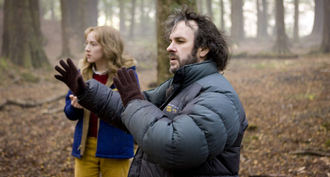 Then there are the moral reasons for omitting the graphic crime. "It would frankly make it a film that I wouldn't want to watch," Jackson said. "I mean, I would have no interest in seeing that depicted on film, and I would not want to see the film. Every movie that I make is a film that I want to see. It's very important. I make movies that I know I would enjoy seeing in the cinema, and that would not be one of them. I've shot some pretty extreme things in my time, with Bad Taste and Meet the Feebles and Braindead. There's a certain style and a sense of humor that I believe you can do to get away with that. But to do anything that depicted violence towards especially a young person in a way that was serious, to me, I would have no interest in filming it at all. It would be repulsive."

If there's any fan of the novel out there who is still not convinced that Jackson made the right choice, he has another thematic reason. He portrayed Susie's entrance into the afterlife in such a way that it wouldn't make sense for her to see her own murder.

"Now the way we restructured the screenplay is we have her fleeing from her murder," Jackson said. "At the point that her spirit becomes disconnected from her body; she's running. She's running across that field, she's running into the street, she's running home, and Susie doesn't know what has happening to her. She's literally confused, and now she finds herself in the in-between, which is essentially the world of dream, of subconscious, of this confused state. She has to start to put the pieces together like a mystery. So that really dictated very strongly that even for all of the other reasons, seeing any form of murder was not something that we wanted to do because of the way that we restructured the story, so that she herself is confused and has to put the pieces of the puzzle together as the story goes on."

For the latest sci-fi news, follow us on Twitter at @scifiwire
Tag: Peter Jackson
Tag: The Lovely Bones