Will Star Trek and other blockbuster-based comics be worth your time?

Comic-book characters have long been zapping, clawing and flying their way to the top of many a studio's summer blockbuster slate, but this year sees a flip of the popular trend in the form of sci-fi films supported by original comic tie-ins.

Waves of prequels, sequels and straight adaptations hope to enhance the moviegoing experience, and for those on pins and needles about some of this year's biggest flicks, we investigated the comic tie-ins for five big-time films to determine which pages deserve a turn and which should be left on the rack. 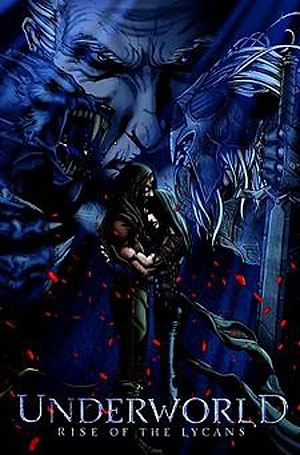 Comic Info: A two-issue adaptation of the prequel was released late last year by IDW Publishing, with a trade paperback already available.

Genre-driven comics house IDW holds a pretty strong monopoly on movie tie-ins. With Underworld: Rise of the Lycans already serving as a prequel to the vampire-versus-werewolf franchise, the publisher attempted to make its adaptation more worthwhile than the average novelization by inviting Underworld actor and co-writer Kevin Grevioux (who stars as the brutish werewolf Raze and writes two titles for Marvel Comics) to draft the comics script.

While picking up the currently available series now will provide little more than spoilers for the film, Grevioux's involvement should make the adaptation match the tone and voice of the screen characters he helped create. And readers who dig the series may be glad to know Grevioux has expressed interest in continuing the Underworld comic adventures with all original stories later down the line.

Worth a pickup?: Only if you saw the movie and really loved it. 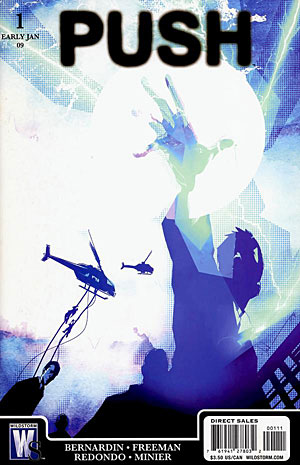 Wildstorm's sole foray into movie comics this season delivers world-building background on Division—the shady government agency on the heels of Chris Evans and Dakota Fanning in next month's telekinetic action flick. While the Push prequel series is set up to explore the lives of some of the supporting players rather than spoil the motivations of the lead cast, it was also prepared with little to no input from the filmmakers.

Co-writers Marc Bernardin and Adam Freeman (who gained solid reviews for their Wildstorm Highwaymen mini) crafted this new story after reading Push's screenplay and getting a few notes from producers. So there's a chance that the final product could add some fun similar to the film, but those looking for an in-depth extension of the movie may want to pass.

Worth a pickup?: More for die-hard comic fans than for intrigued moviegoers. 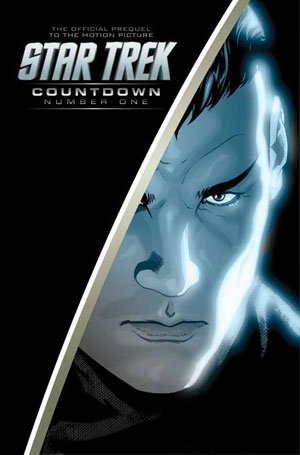 Since its announcement, J.J. Abrams' soft relaunch of Star Trek has kept audiences fretting over the implications a new Enterprise cast holds for longtime Trek lore. The strongest focus of worry has fallen on the film's time-traveling Romulan villain Nero and whether his appearance will place the movie in an alternate timeline from Kirk and company's original adventures. IDW (which publishes a raft of other Trek comics) contributes what appears to be a linchpin series in the form of Star Trek: Countdown, the four-issue mini that connects the dots from between the last Star Trek film (2002's Star Trek: Nemesis) and Abrams' flick.

Countdown's film connection comes through story contributions from new Star Trek screenwriter Roberto Orci, who explained in a joint interview with comic scribes Mike Johnson and Tim Jones that the series will feature both the Next Generation cast of Capt. Picard's crew and the young Kirk and Spock expected in the new film. The story promises the origin of Nero and (considering the screenwriter's involvement) could stand as one of the most canonical Trek tie-ins ever. Still, we still can't say for sure whether the comic will soothe or infuriate longtime fans.

Worth a pickup?: A must for anyone with the slightest Trek background. 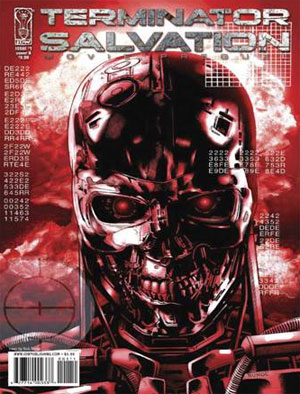 Comic Info: Two four-issue series are on tap from IDW: one a prequel that just hit comic shops and the other an adaptation of the new film.

IDW, unsurprisingly, nabbed the official rights for McG's upcoming Christian Bale-fueled movie. However, like so many other movie comics, their Terminator: Salvation series are connected to the film by way of their writers having screenplay access. The currently running comic prequel checks in with both John Connor and a number of international freedom fighters attacking Terminator assembly plants. The draw there is a number of new Terminator designs by series artist Alan Robinson, but there are few real story connections to the events of the movie. In a novel act, IDW plans to release its Salvation adaptation on a weekly basis shortly before the film's theatrical debut, so anyone worked into a tizzy over the premise (who also doesn't mind heavy spoilers) can spend the month before the movie in apocalyptic heaven.

Worth a pickup?: Pass it over until Judgement Day. 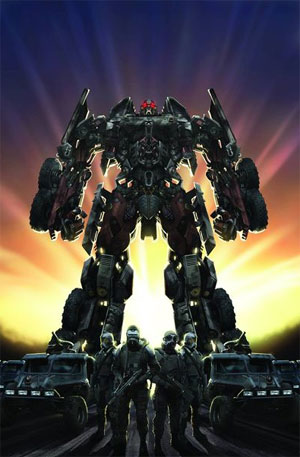 While the Transformers debuted on toy shelves and are best known to general audiences from their '80s cartoon series, the Robots in Disguise hold a long history in the comics world thanks to multi-year runs at several publishers, including Marvel Comics and most recently IDW. The upcoming sequel to Michael Bay's blockbuster Transformers is rumored to borrow heavily from the original comics series in fleshing out the mythological background of Optimus Prime and company, and IDW appears to be making good use of its connection to toy company Hasbro by launching three specific tie-in series.

Last month, the publisher launched Transformers: Revenge of the Fallen Movie Prequel: Defiance and Transformers: Revenge of the Fallen Movie Prequel: Alliance—two four-issue series covering the Decepticons' Cybertron origins and the Autobots' first steps in protecting Earth, respectively. Hasbro's watchful eye over film and comic adaptations of their toys ensures the comics will serve audiences interested in the bigger sci-fi picture of the Transformers Universe well. And to wrap up this spring, longtime Transformers writer Simon Furman (creator of the character the Fallen, who plays heavily into the film) pens the IDW adaptation of the new picture.

Worth a pickup?: Only if you crave sci-fi societal riffs as much as giant robot action. 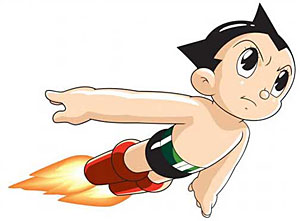 Comic Info: IDW has plans for two direct tie-ins for the fall animated family film, but Astro Boy will appear in a few other comic series before his big-screen debut.

Rumors continue to circulate about whether Imagi Animation Studios will remain a production company through the rough financial waters of the credit crunch, but everyone is certain that their CGI adaptation of Osamu Tezuka's classic manga and anime Astro Boy will be completed for its fall release. And as with so many other movies on our list, IDW nabbed the rights for both a prequel series and an adaptation whose format and release dates remain undetermined just yet. Although more than likely they'll resemble the company's efforts in the Terminator franchise.

However, since Astro Boy has been appearing in manga and other comics for more than 40 years, several other publishers have releases on tap for 2009 that capitalize on the movie's impending release and should prove entertaining for curious viewers. Dark Horse Comics already publishes 23 volumes of Tezuka's manga series and will combine the first two collections into one trade paperback book in September for an easily digestible introduction to the character and his creator. Perhaps more interestingly, American manga giant Viz plans on releasing Pluto—an acclaimed sci-fi manga set in Astro Boy's world by Monster artist Naoki Urasawa—in February, which should appeal to adult readers interested in taking their kids to the new film.

9 anime things that Astro Boy did first
Astro Boy is for kids who like death, abandonment, betrayal

Worth a pick up?: You'd be better off getting the originals for your kids.