Will Bill Murray be a spook in Ghostbusters III?

Ivan Reitman ain't afraid of no sequels! But the legendary Ghostbusters director-producer admits it took the unexpected success of a video game tie-in and a bit of not-so-subtle maneuvering by the studio to resurrect the once-huge comedy franchise from the dead—and he addresses Bill Murray's professed desire to play a more ethereal version of Dr. Peter Venkman in Ghostbusters III.

"Certainly Sony has been all over us for about two decades now, trying to get this going," Reitman told us at the Santa Barbara International Film Festival. "We have this sort of very interesting deal in which we really control the forward progress of the movie. [Sony] did a very interesting thing: They actually hired these two writers on their own, without consulting us, and basically said, 'We're going to start.'"

'Ghostbusters: Afterlife' second trailer lets out the Terror Dogs and confirms a major fan theory
Exclusive: 'Could You Survive the Movies' myth-busts Back to the Future survival rate

Reitman said screenwriters Lee Eisenberg and Gene Stupnitsky—best known for their work on NBC's The Office and the film Year One—are "very good writers, fortunately, and they wrote a first draft that was pretty good, considering that they didn't really talk to us that much. And I've since then been working with them for the last four or five months, just trying to get more of the kind of spirit of the film into it." 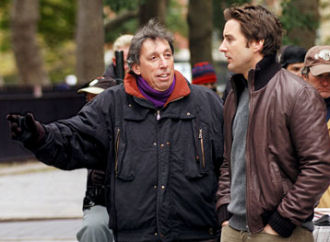 Reitman added: "There seems to be a lot of enthusiasm from everybody" about the return of original stars Murray, Dan Aykroyd, Harold Ramis and Sigourney Weaver. "We'll see. It's still not a reality. There are no deals. There's no real finished script."

Murray was long assumed to be the lone holdout from the original cast, sliming plans for sequels for years. But the actor recently suggested that he'd return to the role under one condition: that he gets to play a ghost.

"We're well aware of his interest," Reitman said with a chuckle when asked whether Murray's Venkman will be going ectoplasmic. "I've had some wonderful conversations with him—and that's all I'll say.

"It was really such a special part of my life, and such a turning point, really, in my career," recalled Reitman. "I love working with those men. I've worked with Bill Murray five times and Dan Aykroyd a few times and Harold Ramis five or six times, and Sigourney Weaver I worked with three times. So the fact that they put out this video game that turned out to be one of the biggest video games of the year sort of reminded us how much resonance the story still seems to have."