Tag: Land of the Lost
Tag: Will Ferrell

Will Ferrell, who stars as Rick Marshall in the upcoming Land of the Lost movie, told reporters that he now sees missed opportunities to insert even more humor in the movie, which is already a comedic take on the 1970s kids' Saturday morning TV show. Because of the visual effects, Ferrell may have forgotten to make jokes because he was concentrating on selling the CGI, he said.

"It was hard, at times, because you're obviously running from point A to point B," Ferrell said in a group interview last week in Hollywood. "It's something that I wasn't used to, and I find in watching the movie you kind of see moments after the fact where we could have made a joke maybe here. So that was a little difficult. But for the most part, the script was pretty well set going into that."

More Land of the Lost

The film updates the visual effects from Sid and Marty Krofft's puppets and allows Ferrell to play the fool in a very realistic magical realm. One scene even has Ferrell's Rick Marshall "invent" the classic TV theme song, strumming on a banjo around the group's campsite.

Ferrell: That was actually a pretty cool moment for me, having been such a fan of the show as a kid. We also shot a really great teaser trailer that they never used, where it was just me in silhouette, black, playing the beginnings of the song and then saying, "That's all I got." And then, "Go see Land of the Lost." Yeah, it was fun. It was also fun to actually play a banjo for whatever the three chords I had to learn to do that. I thought that was a really smart kind of way to pay homage to the theme song, by the fact that he's trying to make amends with the group with this stupid song he figured out while he was sad by himself. So I love that scene.

Did you ever think about doing just one bad effect to pay homage to the original show?

Ferrell: One where it's terrible? No. We knew the Sleestaks would be slow, we would maintain that, but for the most part the decision was made early on to make the effects part be updated and a cool thing as opposed to a kitschy thing, and get to build all the sets and everything. That was really a neat aspect that they decided to add in, but, yeah, there was a decision early on to make that be the great part and then have the comedy bounce off of that.

What was the thought to changing the characters to make them all adults?

Ferrell: For whatever reason, we just thought it would give us a better platform for the comedy. Instead of having my character saddled with these two kids, it just seemed like it was more opportunity to have Will, the character that Danny [McBride] brought to life, and to have a little bit of a potential of a love interest [with Holly, played by Anna Friel], and that sort of thing. We thought we'd mix it up. 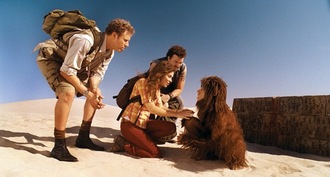 Ferrell: No, no that was always in the script that he kind of quickly figured out, "Oh, is this the way you communicate with women, by grabbing their breasts?" He's kind of sly and a little touchy-feely. We just thought from the TV show—not that it's really a reference for the majority of the audience, probably—but we just thought that would be a funny place for Chaka to go. Then Jorma [Taccone] did such a great job. He kind of came up with a lot of [bits]; when I first meet him and he steals my wallet. He just started touching me everywhere he could, so he was kind of adding all that, too, and it was really funny to play off of. Like Rick thinking, "Oh, he's just saying hello," and not really knowing "What is this guy doing?" So, yeah, some of that was added by Jorma.

You either loved or hated Chaka. Did you hate him, and is that why you had the line about wanting to eat him?

Were there any references you thought would be too inside to put in the film?

Ferrell: The only other references I think we had were the original Will and Holly meeting us at the end of the movie. There's a whole part where we return back to the La Brea Tar Pits, but that ended up getting cut for time. So that was going to be a little homage to them. Outside of getting Sid and Marty in a Sleestak outfit or something like that, or having them just walk through the background shot, I don't know if we had any other obscure ones that we decided not to do.

Ferrell: I would love to. You never know, but I love working with [director] Brad [Silberling] and this cast. It was so fun to actually work with a small cast. I've done ensemble films for so long, it was just so nice. Yeah, given the opportunity, it would be fun.