Will Smith's kid asked Obama about aliens. And the president said ...

One supposes that when one's father stars in so many movies featuring extraterrestrial threats, it might be easy to assume that aliens are, in fact, the real deal. And who better to confirm this than the Commander in Chief? So, despite his father's urgings, Will Smith's son, Jaden, asked President Obama to tell him the truth.

The story, as related by Will Smith in a BBC Radio interview, goes a little something like this. The night before the Smith family was set to visit the White House, Will's son, and co-star in M. Night Shyamalan's After Earth, posed a question:

12 ancient paintings containing surprising evidence of aliens
Science Behind the Fiction: Can we believe the Area 51 witness or was he a liar?

When Smith and his family were getting a tour of the White House from the first family—because, when you're WIll Smith, the president is the one who gives the tours—Jaden decided to spring the question:

"Barack said, 'Don't tell me.' And in perfect form—like this is why he is the president—he stopped and looked at Jaden and said, 'The aliens, right? ... OK, I can neither confirm nor deny the existence of extraterrestrials but I can tell you if there had been a top secret meeting and if there would have had to have been a discussion about it, it would have taken place in this room.' " 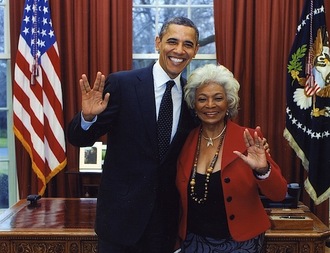 (Via The Mary Sue)