With Impact and Storm, why JAG's David James Elliott is summer's master of disaster

When it comes to having a disastrous summer, no one has it better than actor David James Elliott. He stars in not one, but two disaster miniseries this summer, starting off with a mini with meteor challenges in ABC's Impact, which premieres this Sunday and the following Sunday at 9 p.m. ET/PT; later this summer, Elliott moves on to The Storm on NBC.

Going through this much disaster could give a guy issues. And Impact has certainly made him think about what might be up in space headed our way.

"We seem to think we're pretty safe from meteors since they hardly hit the Earth, or asteroids or comets. But in fact we're not," said actor David James Elliott in an exclusive interview yesterday with SCI FI Wire.

"I found in doing my research that it's totally possible. I was surprised. ... They discovered recently that the Earth has been hit a lot more than we thought originally, like, 10 years ago," said Elliott. "All this stuff I've been reading about, we are finally starting to address that. Apparently they're building a giant telescope in Hawaii that will scan the entire sky, and it will [be] connected to the Internet, so that it won't just be the people [who] work there. Anybody can get on and look and watch and track things like meteors and comets and asteroids."

His research came about due to his role as an astrophysicist named Alex Kittner in Impact. In the two-part, four-hour miniseries, a meteor shower hides a brown dwarf star, which strikes the moon. [Warning: Spoilers ahead, as well as astronomy and physics as interpreted by an actor, about which we offer no editorial judgment.]

"A brown dwarf is the remnant of a dead star," Elliott said. "When a star dies, it packs itself into very, very compressed matter, to steal a line from the film. What happens is this big hunk of dead star hits the moon, and it has the reverse polarity. So it knocks the moon off its axis and changes its polarity. So now it's on a more narrow axis, and it and the Earth are pulling each other closer and closer. We start getting anomalies with gravity lapsing when the moon passes closes to the Earth on its elongated orbit. Gravity ceases to be and people start floating, cars float, the tide change, like going from a 6-foot tide to a 45-foot tide. So there are all kinds of disasters happening."

In the end it's up to his team to come up with a plan to save the world. Impact also stars Natasha Henstridge as Dr. Maddie Rhodes, Benjamin Sadler as Roland Emerson, James Cromwell as Lloyd and Steven Culp as President Edward Taylor. The miniseries was written by Michael Vickerman and directed by Michael J. Rohl. 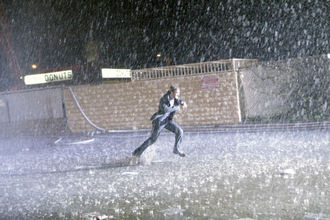 "It's kind of a bit of a morality play in that it speaks to our time about how the world has to pull together because in this situation, with the world disaster, everyone has to put their petty differences aside. Countries work together for the common good," Elliott said.

Elliott (JAG) added that his biggest challenge came courtesy of the challenging dialogue. "I mean, reams of astrophysicist's jargon was daunting," he said. "I mean, all of us we would get together when we had a break and run dialogue. Learning scenes usually you want to keep it hungry. You do your work. You figure out your objectives and everything. You track your path through the piece, but you don't learn the dialogue necessarily that far ahead of time. But with this you just had to, or you would have shown up on the day struggling and there'd be no room for a performance. It would have been just surviving the dialogue. That was the most daunting."

Despite death, destruction and dialogue, Elliott said that he thoroughly enjoyed working with the cast. He'd always been a fan of James Cromwell, and he developed a special relationship with another member of the cast. "Natasha said that I had a bromance going with Sadler," Elliott said with a laugh. "He and I went fishing every time we had a chance. We pretty much did Vancouver Island completely. We'd have two days off, and we'd get in the car and drive."

While Impact focuses on humanity's battle against nature, Elliott's other summer disaster miniseries, The Storm, explores its attempt to control nature. In it, he plays Army Gen. Braxton, a character who has special plans for the weather.

"That was a very stylized piece," Elliott said. "We're calling it a noir sci-fi/action/thriller. It starts off, people come up with this way to generate weather, and they want to use it for good. Let's have it rain in the Sahara. Let's bring water to drought regions. And then my character says, 'Hey, what if it rains in Russia for three months straight?' What could happen then? Things inevitably get out of hand, and that was cool, too. I got to work with Treat Williams; I've always been a fan. It was all good."