Hey, you know what big comic book nerds love? Changing an integral part of the backstory for the most popular character in the Marvel Universe! Be warned: *spoilers ahead!*

Wolverine has been hunting down, fighting, researching and occasionally ball dancing with the Weapon X project almost from the very start. His relationship with it and how it informed his very identity has been at the core of him for decades. So it's understandable that, sometimes, there is a desire, maybe even a need, to shake up the status quo a bit. Jeph Loeb has certainly done that with the latest issue of Wolverine.

First, the good news. There was a retcon stating that Wolverine and Sabretooth were actually descended from wolves, which has now been undone.

Yes, it's practically a throwaway line, but, frankly, that idea didn't merit much more. Besides, the best is yet to come. 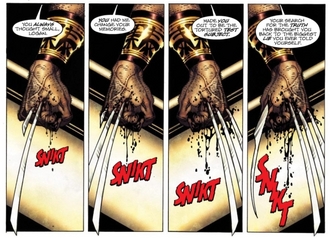 No. That's not it. Yes, four claws is pretty stupefying, sure, but here's the big reveal. Brace yourself!

That's right. Logan himself had his own mind erased to cover up the fact that he was behind the Weapon X project all along.

Now, granted, this is literally coming off the heels of undoing another equally bizarre twist, so it's hard to say how on the level this revelation actually is. Still, though ... really? Don't you think that, after all this time, there would have been some indication that Logan was secretly behind it all? He's a pretty smart dude, so it stretches some serious credibility muscles to buy this news. But here we are and, for at least the next month, this is now fact.

You okay with this, or are you already headed to Jeph Loeb's house to teach him a hard lesson in Wolverine history?