Wolverines! We get a sneak peek at the new Red Dawn

Adrianne Palicki (Legion) will play one of the high-school rebels who take up arms in the upcoming remake of John Milius' classic 1984 alternate-reality movie Red Dawn. But she told us to expect something different and more exciting.

"It's more of a re-imagining rather than a remake, I guess you would say," the 26-year-old actress said in an interview Sunday at the Los Angeles Comic Book and Science Fiction Convention, where she was promoting Legion. "We have different enemies, and there's even more action."

The most gruesome thing in the supernatural Legion? Birth
Scrapped Wonder Woman TV pilot came 'one or two' years too early to be a 'shoo-in,' says star Adrianne Palicki

The update involves a group of teens who become guerrilla fighters against an invasion from China. The Americans are rounded up into camps and forced to listen to propaganda and also face firing squads.

"You'll see a lot more action, a lot more great stunts, and it's very tense," Palicki said. "It's a very timely movie in the world today."

Palicki plays Toni, the role made famous by Jennifer Grey in the original. She co-stars with Chris Hemsworth (who was George Kirk in the recent Star Trek movie) Isabel Lucas (Daybreakers), Josh Hutcherson (Zathura: A Space Odyssey) and Matt Gerard (Avatar). 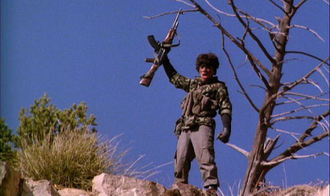 "It's a great young cast, and we're up against great odds, but not as bad as what we're up against in Legion," said Palicki. In Legion, which opens Jan. 22, she and a handful of patrons in a remote diner find themselves caught up in a battle between angels at what seems like the beginning of the end of the world.

The new version of Red Dawn is directed by Dan Bradley, who served as stunt coordinator for the last two Spider-Man and Bourne movies. Carl Ellsworth (Xena: Warrior Princess) and Jeremy Passmore wrote the script.

The original Red Dawn starred Patrick Swayze, C. Thomas Howell, Charlie Sheen and Harry Dean Stanton and was directed and co-written by Milius (Conan the Barbarian) with Kevin Reynolds (Waterworld). It centered on a group of Colorado high-school students who become rebels against an invading force of Cubans and Russians.

Palicki, who was on TV in Friday Night Lights and continues in a recurring role on Supernatural, also worked with John Woo on the TV remake of Lost in Space, playing Judy Robinson.