Writers on how Surrogates subverts its genre

Bruce Willis' new sci-fi action film Surrogates is being released on Sept. 25 and is the second of three films with themes exploring virtual reality (after Gerard Butler's Gamer and before James Cameron's Avatar).

But screenwriters Michael Ferris and John Brancato are confident that their film's ideas are universal enough to appeal to audiences, no matter what their competition is. "It's a very 21st-century fear," Brancato said in an exclusive telephone interview this week. "There's always the sense that 'How well do we really know the people we know?'"

Set for release on Sept. 25, the film unfolds in the near future and stars Bruce Willis and Radha Mitchell as FBI agents Greer and Peters. It's a utopian world in which technological breakthroughs allow people to live vicariously as their minds are downloaded into replicants—or "surrogates" of themselves—while their bodies remain at home. There should be no crime and no one should die, but the problems start when a pair of surrogates are murdered, leading to the remote deaths of their human operators.

Ferris said that he think the film's ideas are particularly relevant in today's age of electronic interactivity. "I think that there is a general feeling that people have through interacting by e-mail and electric personae in place of Facebook and MySpace that there's kind of a cultural dissociation from the self that you have electronically, or some virtual form, and your real self," Ferris said. "There are so many ways in which we're not living direct lives with each other; people are working more online and telecommuting and only having friends that they call each other friends, though they've probably never met in person—and that experience is certainly out in the world now. I think that [our] ideas play on that and take that dissociation a few steps further, about your so-called real self and then a projected self, then it's just riffing on things that exist." 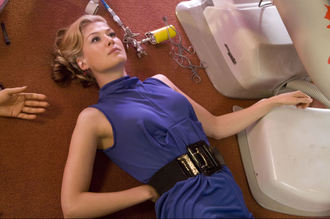 Ferris said that the challenge was bringing the technology to life and then building a compelling story around it. "Initially, brainstorming, you do throw out every possible idea you can come up with," he said. "Dismantle the story and deconstruct it and try to imagine entirely different approaches and implications of this world on the most quotidian psychological levels. It's amazing how little of that thought gets reflected on screen," he added with a laugh.

"We put a lot more effort into things that don't always turn out that satisfying, and people think that we're only scratching at the surface of a technology," Ferris continued. "A lot of that has to do with the limitations of what an audience can assimilate in a film. You have to sort of spoon-feed certain things, and other things you just sort of throw in the background and you hope people are paying attention."

Brancato revealed that the structure of a murder mystery allowed them not only to create an interesting dramatic fulcrum for their idea, but also to put a character at the center of that story who would essentially be a surrogate for the audience's curiosity. "At the end of the day we came back to the detective story," he said, "and it's a trope that's used in dystopian science fiction: Blade Runner is a classic, Soylent Green, a lot of these future movies are built around cops, because cops are going to ask questions in all circumstances, so the audience kind of needs a figure like that to ask questions." 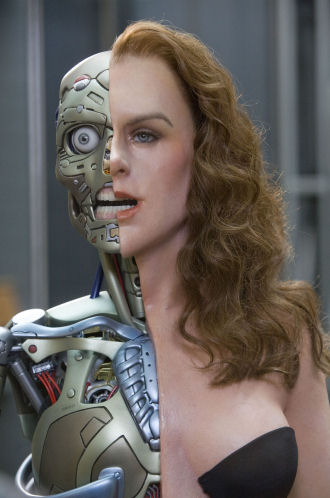 He continued, "Otherwise it's like a movie where people ask continuous questions about cars—it's a technology that people should be taking for granted. In the case of this story, the way in was the fact that people are starting to die while operating the surrogates, and that's never supposed to happen."

Ultimately, however, Ferris said that they did not want to follow the same path as plenty of older films that posit futuristic technologies only to vilify them. "In our initial approach to it, we were extremely familiar with Hollywood's habit of taking a Luddite perspective on technology," Ferris said. "Even if it's really cool, incredible technology, they say, 'Gee, isn't it awful?' That's done in so many movies, and we didn't want to do that. The comic books pretty much took it in that direction, and we tried a few different approaches to it. But, frankly, we sort of wound up a little bit toward the way in which technology—like plenty of familiar ones—can dehumanize and remove people from direct connection with each other and themselves."

Brancato added, "We just went back and looked at what was written about the perils of virtual reality, to see it played out on a real-world stage and then making it a little more visceral while having the same kind of overall impact. But the virtual-reality metaphor is a metaphor for drug addiction and plastic surgery and all of the ways in which people remake themselves to be something they're not."