This one nearly trumps the Manti Te'o imaginary girlfriend. A Canadian dude is trying to lure ladies into some sci-fi role playing in his mom's garage. But wait, lunch may be included!

Give this guy an "A" for effort. His Craigslist ad, posted last week under the handle "Make It So," is recruiting two or three girls for some harmless Star Trek: The Next Generation make-believe time. And don't even think about bringing your "Kirk Rules" game, because in his realm Picard is the only real deal. Engage!

According to the boldly hilarious ad, he's built a starship bridge and shuttlecraft in his mom's empty garage and is looking for some game crewmembers with their own costumes and props. Oh, and did we mention he also has his own doctor's prescription pad and can "write you a prescription for basically anything you want"? Sounds a little fishy, but hey, a free lunch is a free lunch. Grilled cheese, anyone? 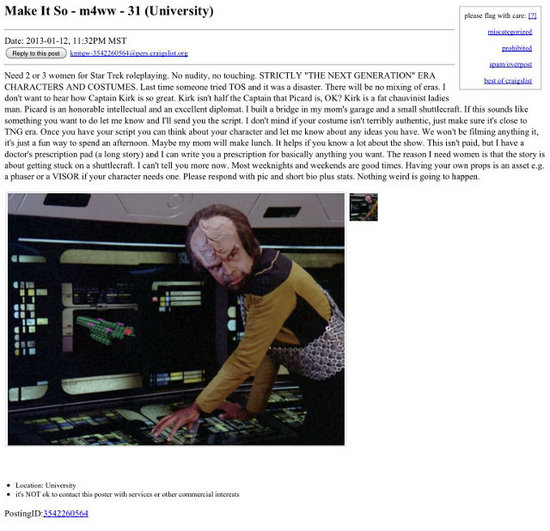