WTF? Did Lucas get famous Star Wars phrase from a '74 Vogue ad?

George Lucas has talked openly for years about his inspirations for Star Wars, including everything from ancient mythology to the films of Akira Kurosawa. But one eagle-eyed writer just noticed that he may have also drawn inspiration from a less-expected place: Vogue magazine.

Author Virginia Postrel was doing research in some '70s Vogue issues last month when she came across a full-page ad that caught her eye. The ad is from the August 1974 issue, nearly three years before Star Wars' release. It's an ad for a new fabric from designer Robert-David Morton, and because the product is billed as the way of the future, the ad has a bit of a space theme. It also bears an uncanny resemblance to the opening of Star Wars.

George Lucas' third Star Wars trilogy would have made Darth Maul the big bad along with a 'new Darth Vader'
Sorry Ted Cruz, Star Wars has always been political — and liberal 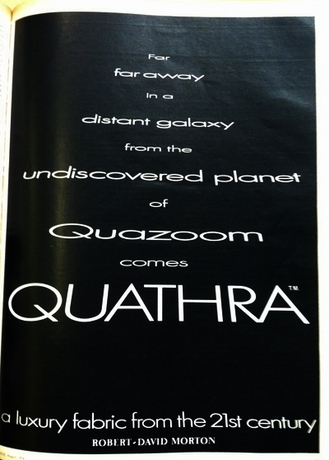 Note the use of the phrase "Far far away in a distant galaxy" (really just another way of saying "in a galaxy far, far away," right?) and the text that looks like it's disappearing into distant space. It could just be an amusing coincidence, but given its proximity to the time Lucas was trying to get his little space opera made, we have to wonder: Did George Lucas read Vogue?