Yes! Trek's Abrams to make a sci-fi movie with Spielberg!

Boy, these sci-fi titans sure like to play in the same sandbox: New York magazine's Vulture blog broke the news late Wednesday that J.J. Abrams—mastermind of Lost, Fringe, the Star Trek reboot and about 354 other projects—will direct a movie that is a straight homage to the early films of Steven Spielberg—with Spielberg himself as a collaborator.

A source told Vulture that the script was "a tip of the hat to [Spielberg's] movies of the '70s and early '80s," apparently meaning landmarks such as Jaws, Close Encounters of the Third Kind and E.T.: The Extra-Terrestrial, adding that it will "deal with everyday people whose personal relationships are tested when they are thrown up against extraordinarily fantastic—and possibly other-worldly—events."

Other facts: Abrams is actively discussing the project with Spielberg and anticipates his getting involved in some capacity; the movie will be modestly budgeted, like the Abrams-steered Cloverfield, at around $25 million; and while it does have a title, that title will be kept a secret as per the usual Abrams M.O. (May we suggest the code name "Bruce," after the shark in Jaws, or is that too obvious?)

Spielberg himself once "collaborated" with legendary director Stanley Kubrick on A.I.: Artificial Intelligence, which Kubrick had been developing for years, finally writing and directing the movie himself with Kubrick's blessing. But Kubrick died in 1999, two years before A.I. came out, so perhaps Abrams wants to team up with his hero to avoid any such disappointment later. 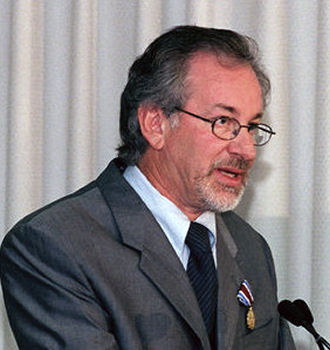 Both Abrams and Spielberg do enjoy bringing everyday people up against large, seemingly paranormal or extraterrestrial forces, and both like to tell stories in epic style. Abrams likes handheld cameras a lot, Spielberg not so much, although he's dabbled in recent years. And Abrams doesn't shy away from ambiguous or unhappy endings (see Cloverfield again), while Spielberg, as great as he is, has nearly ruined some perfectly fine pictures, such as Minority Report and War of the Worlds, by slapping an "uplifting" coda on what should have been a darker finale.

However it turns out, this will be a heck of an interesting project to keep an eye on. Spielberg and Abrams working together on this, Peter Jackson and Spielberg teaming on Tintin, Jackson and Guillermo del Toro partnering on The Hobbit ... who are the next sci-fi/fantasy behemoths to work together?