You won't believe how gory and violent Repo Men is

The sci-fi action movie Repo Men earns its R rating in a major way: It's up there among the most graphic R-rated films to come along in a while, with dozens of characters shot, sliced, zapped and otherwise maimed or mutilated, with main characters Remy (Jude Law) and Jake (Forest Whitaker) inflicting much of the damage. Director Miguel Sapochnik doesn't flinch from the violence, and at times it's even balletic in nature.

Law said that the script was very descriptive of the violence. And it should be noted that Repo Men is an adaptation of Eric Garcia's novel The Repossession Mambo.

"We knew when we read it that it was going to be extreme, and for my part, I constantly thought, 'How much are we going to be able to get away with?'" Law said in press conference in New York City. "Miguel really fought for it. ... I'm going to be more sort of impressionistic about it. The idea of these two men in a society that's desensitized to violence, it was important to the theme of violence, and that the graphic nature of the violence be very real. And then the rest of the film, the journey of the film broadens, especially towards the end, when it becomes almost unreal, this level of violence, this grotesque use of the body, or dissemination of the body, [and] you suddenly start to realize, you've been so brought into the world that you continue to believe in it." 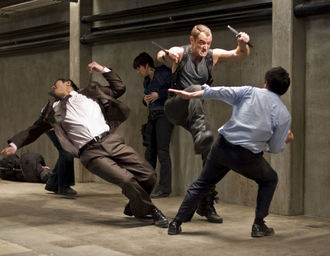 Law also said everyone involved "hoped" that the film and its violence would make people close their eyes. "Especially young people, when they're watching that sort of stuff, it doesn't do anything to them, and I hope this one does, that it's shocking, because it should be," he said. "Violence is shocking."

Whitaker concurred, saying to Law, "It's part of the dilemma for your character, too. What [Remy] faces is the construction of violence and what it means, and it's personal."

Law added, "Yeah. How far do we go for it to be shocking? For us to wake up?"

Some people might wonder what in the world Oscar winner Whitaker and Oscar nominee Law are doing in an uber-violent movie.

Understandably, the two actors don't look at it that way. the two stars explained that they liked the story's concept—Remy (Law) and Jake (Forest Whitaker) are repo men and lifelong friends who go mano-a-mano when Remy defaults on payments for his new mechanical heart—and were eager to do something different.

"I saw it as an interesting character, a well-written script, the chance to work with someone who was really talented, a good director, something new," Whitaker said. "I'm always trying to challenge myself to do something new, to try to do something great, whether it's sci-fi or comedy or whatever."

Law nodded in agreement and said, "And there's still a serious theme. It still required a lot of work and attention, even the physical side. I know the physical side of films, the action, the violence, is considered thrill-seeking or what have you, but to make that kind of stuff, especially when you have something grounded in reality, it's not just gratuitous. It required a hell of a lot of work. And I think we both ... what Forest said; it's fun to try new things."