Your vote for Batman's next villain: A rogues gallery

Now that the release date for Batman 3 (or whatever it's going to be called) is set for July 20, 2012, let the debate begin: Who will the Bat battle next?

The Joker is presumably locked up in Arkham Asylum, and while there is always a chance that director Christopher Nolan will recast the part, he might want to leave the late Heath Ledger's iconic performance as his final statement on the character and move on.

The characters of Two-Face and Ra's al Ghul are both dead. Luckily, however, Batman has one of the most colorful and diverse rogues galleries in comic-book history. While Nolan's grittier, more noir-inspired take on the mythology would probably prevent the likes of Mr. Freeze, Killer Croc and Man-Bat from reaching the screen, there's still plenty of bad guys—and girls—around to keep the Bat and all of Gotham City on elevated-alert status.

Speculation about Batman's next antagonist has been floating around since before The Dark Knight came out in July 2008. Back then, MTV surveyed a range of comic-book writers and editors about their picks for a third movie villain, with DC Comics head Dan DiDio and famed writer Geoff Johns both picking the early comic-book character Hugo Strange, a psychologist with a nasty way of treating his patients.

Meanwhile, other comic-book heavyweights, such as Grant Morrison, Tim Sale and Mark Waid, all opted for Catwoman, although Waid cautioned, "It would have to be something we haven't seen before. The jewel-thief thing was interesting, but it's hard to relate to a jewel thief." Writer Jeph Loeb also chimed in, saying, "What I love about Selina Kyle and Catwoman is that she sees Batman as a ball of yarn she gets to play around with."

While wanting to see Catwoman sink her claws into the Bat, CinemaSpy's Phil Guie wrote last year that one interesting option would be to "create a new villain from the ground up. One who is far more menacing in a 'real life' sort of way. One could imagine someone like Russell Crowe as a sort of global mafia kingpin/drug czar who is a bit twisted. Or something like that."

Fans around the Web seem to favor the Riddler, and indeed the Prince of Puzzles also has Batman stars Gary Oldman and Michael Caine, as well as composer Hans Zimmer, among his supporters. Fan site blogger Vic Sage at ComicBookMovie.com reckons he wouldn't mind seeing the Riddler as a second villain, but for the main bad guy he prefers Black Mask: "A guy who is a rival to both Bruce Wayne and Batman. He is also the perfect amalgamation of Gotham's mob family and the 'freaks' of Gotham City."

Batman-On-Film.com blogger Mark Hughes posted an essay in February summing up the possibilities with a lengthy list of villains who could be "Nolanized." Among them is the Penguin, whom Hughes re-envisions as a crime boss who cuts a deal with Batman to take control of the mob while the Caped Crusader hunts down the "freaks" running rampant in Gotham: "I really like the idea of Batman feeling caught in a gray area, with the mobs collapsing and resulting in turf wars and smaller street-level gangs and criminals getting out of control while there's a surge of 'freaks' ... the Penguin's offer seems like the only way to quickly end the situation and save more lives in the short-term." 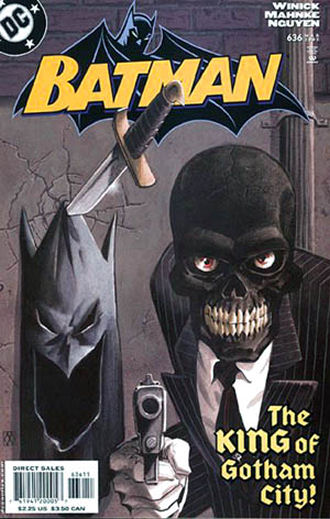 Villain's backstory: Real name: Roman Sionis. The Mask first appeared in Batman #386 in August 1985. His eerie, skull-like mask is carved from the wood of his mother's coffin. An unhappy child, he eventually murders his parents and ruins the family business, which drives him to become a vicious Gotham crime boss. He also has a personal history with the Wayne family that causes him to hate Bruce Wayne.

Villain's power: Nothing out of the ordinary, but he's a brilliant crime strategist, a sadistic thug, and he knows his way around guns.

Why this villain would rock: Black Mask is the kind of "realistic" villain, with just the right dark, twisted edge, who would fit perfectly into the Nolan universe. Plus he's got a bone to pick with Batman and Bruce Wayne.

Why this villain would suck: Aside from his mask, in some ways he's just another crime boss, and we've seen plenty of those so far in Nolan's first two Bat-flicks. 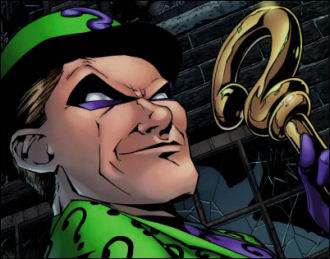 Villain's backstory: Edward Nygma is a longtime Batman nemesis, having first appeared in Detective Comics #140 back in 1948. Obsessed with riddles and puzzles from a young age, he uses them to commit crimes and feed his monstrous ego by challenging Batman to see who is intellectually superior. More recently he's worked as a private detective himself, offering help to an irritated Bat.

Villain's power: He has no superhuman abilities, but his talent at creating and solving puzzles is second to none. He's also good at designing deathtraps.

Why this villain would rock: The Riddler's puzzles and traps would provide a true test of Batman's intellectual and deductive capabilities while continuing the anarchy unleashed by the Joker.

Why this villain would suck: Riddler is considered to be similar to the Joker in many ways, so introducing him into Batman 3 might feel like a rehash of The Dark Knight. 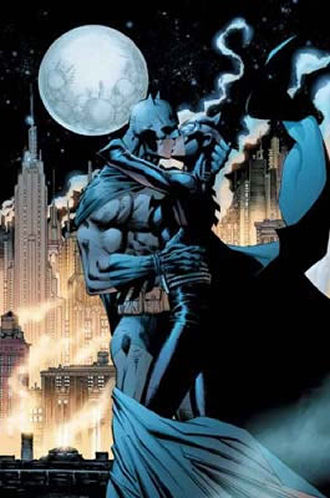 Villain's backstory: Selina Kyle appeared in Batman #1, all the way back in spring 1940, as a costumed jewel thief and burglar. She eventually becomes the great love of Batman's life, as well as a sort of antihero who occasionally helps out the Caped Crusader.

Villain's power: She's athletic and a hell of a fighter, not to mention dangerous with a whip.

Why this villain would rock: Not only is Catwoman sexy and mysterious, but the tension between her and the Bat—they're on opposite sides of the law, yet deeply attracted to each other—would add a whole new layer to Nolan's Bat-mythos.

Why this villain would suck: We've seen Catwoman before in Batman Returns, and she doesn't have the frightening, mythic power of the Joker. Stealing jewels doesn't seem that big a deal after bringing a city to its knees. Plus, that Halle Berry movie may have killed this character for good. 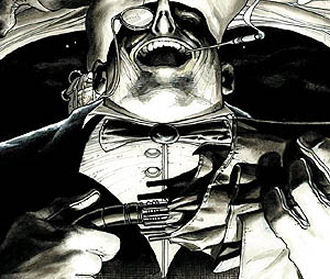 Villain's backstory: Arriving on the scene in December 1941 (Detective Comics #48), this short, rotund crime boss is known for his deadly high-tech umbrellas. A debonair criminal mastermind, Oswald Cobblepot prefers keeping a relatively low profile and even acts as an informant for Batman from time to time.

Villain's power: Aside from his gadget-laden umbrellas, the Penguin relies primarily on his wits to navigate Gotham City's underworld and stay out of Batman's way.

Why this villain would rock: The Penguin's more "refined" approach to crime could present a different kind of antagonist to a Caped Crusader used to dealing with out-and-out psychopaths.

Why this villain would suck: Penguin needs a lot of work to make him seem even half as dangerous as the Joker, Scarecrow or Ra's al Ghul. 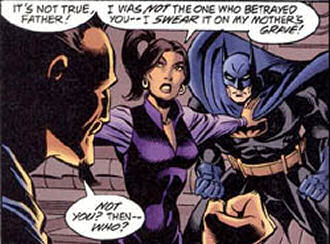 Villain's backstory: The daughter of mystical crime overlord Ra's al Ghul, Talia first appeared in May 1971 in Detective Comics #411. She has been most often portrayed as a love interest for Batman, with her father hoping the two will hook up. Like Catwoman, she is not an outright villain(ess), although she definitely has criminal tendencies. In the comics, she's also mother to Batman's son (!), Damian.

Villain's power: She's as skilled as her dad in mixed martial arts and hand-to-hand combat, minus the immortality and droopy mustache.

Why this villain would rock: A less obvious and perhaps more unconventional choice than Catwoman, she would also elegantly tie the third film back to Batman Begins and her father.

Why this villain would suck: Because she's not Catwoman! 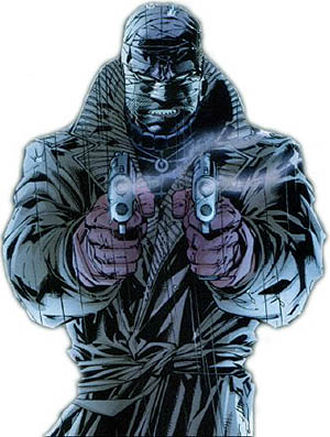 Villain's backstory: Hush, aka Thomas Elliot, is the most recent villain on our list, having made his debut in Batman #609 in November 2002. Once a childhood friend of Bruce Wayne, he harbors a grudge against his former pal for his luxurious lifestyle. Even though Elliot himself is a successful surgeon, his obsession leads him to join with Gotham's other supervillains to take down the Bat.

Villain's power: Hush possesses a brilliant tactical mind, a sharp talent for manipulating others, fierce shooting and fighting skills and the ability to change his appearance through self-inflicted plastic surgery.

Why this villain would rock: Like Black Mask, the personal connection with Bruce Wayne adds more resonance to an already deep storyline. Plus Hush is a sociopathic badass.

Why this villain would suck: Hush is brooding and distant—almost too much so for an epic movie in which it's necessary for the villain to be larger than life. 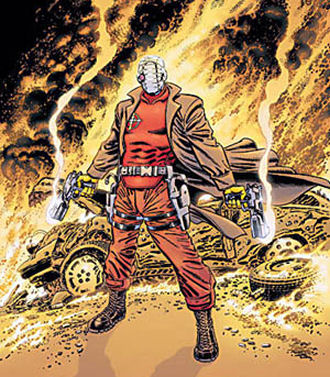 Villain's backstory: First coming to Gotham in Batman #59 (June/July 1950), deadly sharpshooter Floyd Lawton initially seems bent on wresting the crimefighting crown away from Batman. But he's really out to take control of the city's underworld. He's gone through a lot of changes since, but we like that origin.

Why this villain would rock: His twisted morality makes him a prime candidate for Nolan's vision of Gotham, and having Batman battle what he first takes to be another crimefighter is an interesting concept.

Why this villain would suck: Does a sharpshooter—even one as twisted as Deadshot—sound like the basis of an exciting and epic finish to Nolan's Batman trilogy? 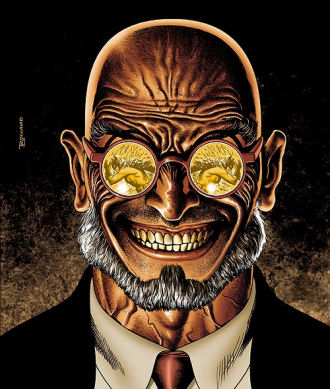 Villain's backstory: Believe it or not, Hugo Strange appeared in the comics before the Joker and Catwoman, showing up in Detective Comics #36 way back in February 1940. As originally conceived, Strange is a mad doctor with a tendency to turn people into monsters and zombies for use as his own private criminal army.

Villain's power: He knows how to mix up the medicine.

Why this villain would rock: Hugo Strange sending an army of "monster men" after the Dark Knight could take the series in a wild and macabre direction.

Why this villain would suck: Hugo Strange sending an army of "monster men" after the Dark Knight would probably fit better into the Adam West TV show than Nolan's Batman 3. 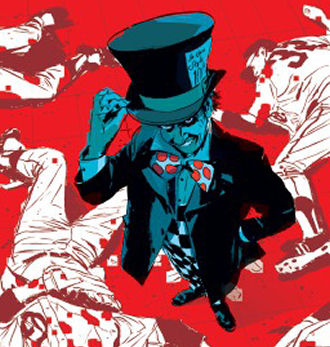 Villain's backstory: Joining the list of Batvillains in October 1948's Batman #49, Jervis Tetch is another scientist gone loopy who has developed mind-control mechanisms that he plants on people through his famous hats. And yes, he's a big Lewis Carroll fan.

Villain's power: He can dominate and hypnotize victims through his mind-control gear.

Why this villain would rock: While the Mad Hatter's MO stretches credibility, the idea of a villain possibly trying to control Batman's mind is tantalizing.

Why this villain would suck: Didn't we just see this guy in Alice in Wonderland? 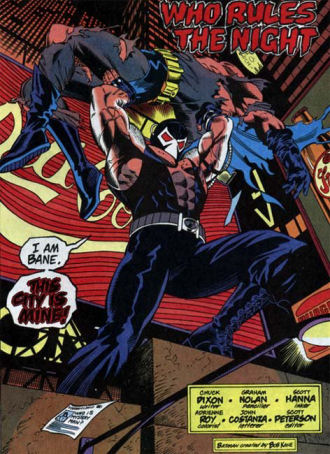 Villain's backstory: One of the most popular villains in recent Batman history, Bane made his first appearance in Vengeance of Bane in January 1993. Born in a harsh Caribbean prison, he survives through acquiring intelligence, fighting skills and raw strength. Addicted to a mysterious drug called Venom that enhances his strength, he becomes obsessed with destroying Batman. He nearly does just that, driving the Caped Crusader to the brink of collapse before a brutal physical confrontation in which Bane breaks Batman's back.

Why this villain would rock: We've added him by popular demand because Bane is one of the most formidable foes that Batman has ever faced. Although he might have to be reshaped a bit to fit the Nolan Batman films, he's still a dark, dangerous presence and arguably the one villain who nearly took the Bat down for good.

Why this villain would suck: A ridiculous, barely recognizable version of Bane appeared in 1997's Batman and Robin, and Nolan might want to stay away from anything that dredges up memories of that disaster.

Creators of animated ‘Harley Quinn’ series reveal the Batman scene so risqué, DC made them cut it
From Bruce Wayne's Bat-a-wang to Harley Quinn’s hot-tubbing, 10 racy moments from the Batman canon

Do you have other suggestions? Give us your reasons!