Fox's Fringe returned last night after a two-month break with "Peter," which was anything but your typical Fringe episode. There were no gruesome deaths, no crackpot science and no doddering Walter with his humorously inappropriate Walterisms. What we did get, however, was probably one of the best episodes of the series ever. (Spoilers ahead!)

While "Peter" offered up a story we mostly expected since we saw Peter's tombstone with that death date of 1985, it also give us a fabulous performance by John Noble as Walter, serving up the raw emotion of a father with an impossible choice. As LizW65 wrote on fringebloggers.com, "Somebody just give John Noble an Emmy, now. Please?"

The last original episode we saw months ago, "Jacksonville," set up the story when Olivia (Anna Torv)—whom Walter helped channel to see objects from the other side as glimmery—saw a glimmery Peter. Instantly she knew—and we knew for certain—that Peter (Joshua Jackson) was from the other side, and Walter knew he was in deep trouble because the secret he'd kept so long was out.

"Peter" takes place mostly in the 1985, when Walter is a scientist who's not only figured out that there's a more advanced alternate universe existing outside our own, but has also come up with a window to look into that universe. While he copies sleek cell phones to tease the military about possible applications, his real interest is trying to discover a cure for his young, gravely ill son, Peter (Quinn Lord). 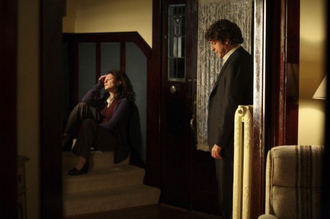 What Walter also knows, however, is that alternate-universe Walter also has an ill son, and his more advanced science might just help find a cure for both boys. But when our-universe Peter dies, Walter and his wife, Elizabeth (Orla Brady), are devastated. Still, the scientist in him can't help but watch as his Walternate self continues to try to find a cure for his seriously ill, but still living, son.

When our Walter figures out the cure that Walternate misses, what's a soon-to-be-mad scientist and grieving father to do? Walter's pretty lab assistant, Dr. Warren (Jenni Blong), tells him that his plan to cross to the other side to give the alt-Peter the correct medicine is a bad one. The energy needed to create a portal to another universe "for the sake of one life" has the potential to destroy both worlds by rupturing "the fundamental constants of nature." However, what parent wouldn't give the world (or even two) to save his child, especially if that parent is the brilliant Walter Bishop and the cost is one that can't really be imagined?

Walter (far too conveniently) insta-designs a door to the alternate universe all by himself. While Warren and Nina Sharp (Blair Brown) try to stop him, Walter persists and gets to the other side, although his cure gets smashed. After that, events transpire that change everything, as Walter crosses the line in every conceivable way. 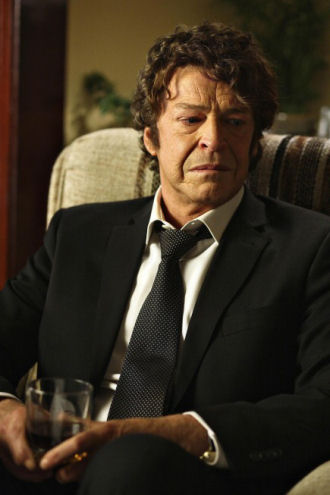 "All I can say is ... WOW! So incredibly understated and heartbreaking," wrote fringebloggers.com Elaine. "Naturally, the way the story unfolded was all kinds of genius, but I think what I appreciated most about 'Peter' was how subtly the writers answered so many questions, while simultaneously raising a ton more ... I also really liked how they deconstructed Walter and Nina's lies about what happened on the night Walter walked between worlds to save Peter, but managed not to cheapen the story they already told us."

Sandbur from tv.com wrote: "Lots more places for the writers to take us now. I mean really, I think they may have just opened up a whole new universe of possibilities ... sorry about that ... I'll try to do better! But I do mean really, this one even answered some Nina Sharpe and Observer questions. And poor Walter. As if it isn't bad enough to have the weight of one world on his shoulders; this guy is carrying the weight of two worlds."

While most commenters ran on the "'Peter' episode was f--king brilliant" side, thefanof had this to say: "Fringe has been renewed for a third season already so I suppose they needn't worry about ratings at this point, but for a show that is struggling to generate an audience I have to question to have this episode air right after the show returns from a hiatus. New viewers might decide to check out the show based on the cool sci-fi catastrophies in the cold opening, not because the show is giving them a detailed episode on the backstory of one of the characters."

But in the end kml on the Fox Fringe said it all: "Peter is going to FREAK when he finds out he's an alter. I feel so bad for Walter. I mean, the poor guy did what he did out of desperation, but now it's going to come back and ruin his life. I admit it, I love Walter. He's just simply the best character in the series to me. Anyway, his relationship with Peter is growing and you can see that Peter absolutely loves him and now you can see Peter's growing feelings for Olivia and .... oooh, this is getting good."

What did you think of last night's key Fringe episode, "Peter"?