Z Nation 401 Recap: It looks like someone needs a hug

Spoilers ahead for Z Nation's “Warren's Dream,” because hey … it's a TV Recap.

In last season's finale, “Everybody Dies in the End,” it indeed looked like everyone was going to die in the end. It would have made a really short Season 4 if the apocalypse had actually won, but I wouldn't put much past Z Nation. Murphy and Warren were shot, and Addy sent The Man over the edge of the cliff, followed by Lucy, with the Zona helicopter looking like it was opening fire on the rest of the gang. Could this be the end of our heroes?

Even though it's been two years, the time jump gets us past Murphy as the bad guy and Lucy's age hopping and a bunch of other miscellaneous distractions like Red Hand. This season it looks like Warren and the gang, once they get back together, will have a new Mission to tackle.

Warren is in a wasteland. Zs on the horizon come toward her and she gets ready to fight, but they burst into flames. Black flakes fall on her and suddenly she's burning too. Warren wakes up cocooned in some plastic stuff in a white hospital room with white hair. She's disoriented, but she knows she's in trouble despite some fancy plastic coma high heel shoes she's wearing. She grabs a mallet and prepares to bash in the skull of the first zombie or bad guy she sees. Only it's a little girl, who suddenly enters Warren's dream screaming and starts burning as Warren, back in the hospital room, falls to the ground unconscious.

Warren wakes up to see a perfectly groomed Murphy, wearing a sweater vest and a tie and looking like he's been plucked out of a '50s TV show. He's not blue anymore. He seems very happy that Warren is still alive and out of her coma. Murphy tells her she's in Zona, that he's cured, and that she is too. Since the bullet passed through him and into her, “It looks like a little Murphy blood is good for what ails ya.” In fact, everyone in Zona is cured from a vaccine made from Murphy's blood.

Warren is shocked to learn she's been in a coma for two years. Murphy tells her that her friends are all dead. Worse yet, “There's nothing left of the old world but rotting Zs and what's left of a few Enders.” Then Murphy takes her on a tour outside, where everything is too sunny and too perfect. Apparently Zona has clothing optional Thursdays, golf, tennis, and lots of people looking like they're just coming from a country club. “We've got all seven days here, just like pre-Z. They've got everything here, except zombies ... and the clap. They got rid of the clap. I love this place.” They owe it to everyone who didn't make it to enjoy the fact that they're alive, Murphy says.

“Now is the time for all good men to kill some puppies and kittens.” -- Doc

Yep, apparently Murphy was lying or falsely believes that the gang is dead. Doc meets up with 10K and Red, who are living in a tree tent. Addy, who's sporting an eyepatch, is traveling with a grown-up Lucy (who's still blue), and they're saving people with the help of Lucy's Z-whispering skills and Addy's spiked Z-wacker. And Sun Mei is with a group waiting for transport to NewMerica. It seems like everyone made it out alive and survived for the two years except little 5K (and maybe The Man). And everyone is talking about or heading to the refugee camp, where they're waiting for transport to NewMerica, a safezone in Northern Canada where the Zs can't function because it's too cold. Maybe they'll find Citizen Z up there.

Protecting the camp are a handful of Marines trying to keep people calm while they are waiting for the transport to arrive. “It looks like someone needs a hug,” Lt. Mueller tells an angry woman, and sure enough, he gives her a hug. Despite herself, she hugs him back. “Human contact is very important,” Mueller tells her.

Doc, 10K, and Red arrive at the camp and reunite with Mei.

Warren and Murphy are traveling in a self-driving car and dressed for a fancy affair. In fact, Warren is looking a little way too slinky for the zombie apocalypse. Murphy is taking her to meet the Founder, who started Zona and with Murphy's blood and his vaccine “saved humanity, or at least the richest .0001% of humanity ... and us.”

Murphy and “General” Warren meet with the Founder, who's dragging around an oxygen tank and looking a little worse for wear after trying an initial vaccine on himself. The Founder tells her that everyone knows about what she did to deliver “The Murphy” to them alive. According to Warren, “It wasn't easy considering that half the time I wanted to kill him myself.” The Founder introduces her to a room full of rich (and very odd) people as their “hero's hero.” He also informs her that he wants her to be part of the gene pool.

At dinner Murphy chats up Warren's protection of him. “Talk about badassery, I would have been dead 20 times over if it wasn't for her cutthroat killer instinct,” he tells the group. Meanwhile, Warren learns that there are 10,000 citizens in Zona. And Warren manages not to rip anyone's throat out when a woman asks her who did her hair. “It kind of did itself,” says Warren.

Unsteadily, the Founder gets up and makes a speech. “We can not wait 10 years for the last zombie to die of starvation. We must hurry history along ... Now with the shield of the vaccine and the sword of our wisdom it is time for The Reset.” They all raise their glasses, including a creepy pinched-faced fellow with glasses. You just know he's going to be bad news.

“They're still after your blood.” -- Addy

Addy and Lucy are racing away from some Zona bad guys on a dangerous road filled with Zs. Along comes Z Nation's version of a zombie horde in the form of a rolling ball of Zs that barely miss Addy and Lucy and roll right over the Zona guys' car.

Unfortunately their escape is short-lived. Later the girls fall into a trap and are kidnapped by a different car of Zona guys. They really, really want Lucy, which implies the Murphy cure isn't all it's cracked up to be. We do get a good look under Addy's eyepatch, and it's not pretty. With both girls tied up, Addy tells Lucy with her mind to save her energy and wait for the right time to escape.

At the refugee camp, Doc and 10K reconnect, while Red and Mei catch up. Both 10K and Red give their versions of what happened to 5K, which involves a murder of crows swarming on him and him possibly being alive or not. Elsewhere at the camp, the Marines can't get through to anyone, which doesn't bode well for that expected transport to NewMerica.

“I understand your two favorite things are chocolate and killing zombies.” -- The Founder

After dinner, the Founder has a special chocolate volcano zombie cake brought in for Warren. The chef hands her a knife to cut the cake. But suddenly Warren is back in the wasteland having a vision as she stabs a Z head over and over. But then she's back at dinner and she's killed the cake, the cake's red filling flung all over the dinner party. Well, that's what they get for dressing Warren up like Jessica Rabbit and forcing her to make nice after she just got out of a coma.

On the way back, Warren tells Murphy that she has to get out of Zona and that she can't stay. She jumps out of the car and steals a gardener's car. She drives to one of the buildings and knocks several guards unconscious, occasionally flashing back to her vision of the apocalyptic wasteland, only to find that Zona is an island and they are surrounded by water. She's not going anywhere. The guards take her away. 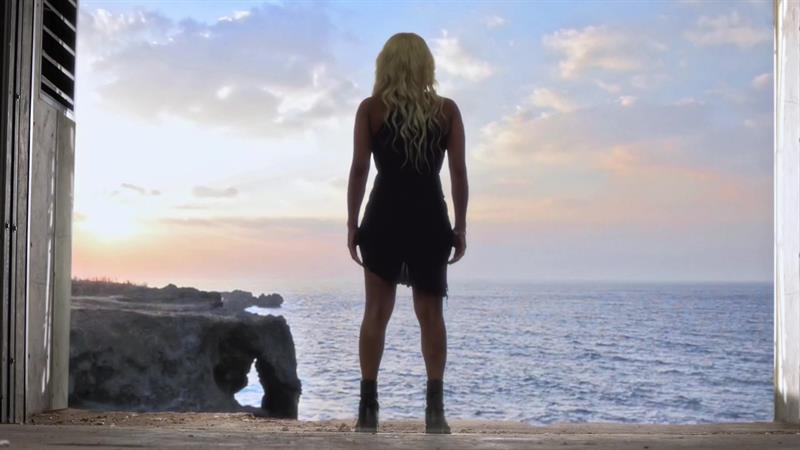 “The mission is over, Warren. There is no one left to save but ourselves.” -- Murphy

In an ambulance, Warren is strapped to a gurney. Murphy asks her to enlighten him as to why she wants to leave. “Don't go all PTSD on me and blow the first good thing that's happened to us since Day One.”  She admits she doesn't understand either. Perhaps Warren's Spidey sense is tingling because the people are freaky types and something is seriously off with Zona. Murphy may have drunk the Kool-Aid, but even after waking up from a two-year coma (and looking fabulous, white hair and all) Warren isn't likely to buy into “The Reset.”

While the ambulance is heading to take Warren to a pysch evaluation, she slips into another vision. She's back in the wasteland, looking at a floating instrument panel. A giant stingray creature floats above her. The ambulance suddenly stops and Murphy wakes her up. Murphy unties her just as the door opens and Dr. Teller tells them to come with him. “There's no time to explain,” he tells them.

In a lab, creepy pinched-face glasses guy is in a full blown bio-hazard suit. He attaches a canister to a connector and watches as a moving zombie hand burns just like the Zs in Warren's vision.

It looks like the Mission this season will be to deal with Zona and discover whether NewMerica is a real thing. The tone of the show remains intact, with Murphy back bouncing his one-liners off Warren, and hopefully the storylines will stay more streamlined than they did last season. And it also looks like there will be plenty of humor, zombie-killing and evil humans for our heroes to deal with.

Z Nation Season 4 Finale recap: To the end of everything
Z Nation 4.08 recap: Sometimes you've just got to believe

Here's a look at next week's episode: