Zombieland stars on joking their way through the zombocalypse

There are worse ways to make a living than cavorting around the countryside with heavy artillery, cracking jokes and pretending to shoot zombies, but that is just what the stars of the horror comedy movie Zombieland had been doing when we caught up with them last April.

In the movie, directed by newbie Ruben Fleischer, Woody Harrelson plays seasoned zombie killer Tallahassee, Jesse Eisenberg is the callow Columbus, Emma Stone is the comely Wichita and Abigail Breslin her little sister, Little Rock. They are an unlikely group of friends who have been thrown together in a post-apocalyptic U.S.A. populated largely by the flesh-eating undead.

SCI FI Wire was among a group of reporters who spoke with the stars on the movie's Georgia set a while back, and in this second set visit report, they tell us why they signed on.

The scene being shot this evening involves a pit stop by the group at a roadside Indian trading post that's supposed to be somewhere between Arizona and New Mexico. Tallahassee makes short work of the shop's undead guardian with shotgun blast to the noggin, and the group enters for a browse and a heart-to-heart conversation. After a revealing moment in which Tallahassee realizes that Columbus has a crush on Wichita (and who wouldn't?), the team decides to let off a little steam with some therapeutic destruction of the trading post's many fragile mementos.

The set for the scene has been built from the ground up in the remote Georgia town of Rutledge, about 50 miles away from the capital city of Atlanta. SCI FI spent a day observing the shoot and getting a good feel for Zombieland's lighthearted mix of gore, laughs and action.

Asked what attracted him to the role of the heroic, wise-cracking Tallahassee, Harrelson offered his trademark smirk. "He's just this s--t-kickin' kind of guy who's really got this broken side to him," he said. "I really loved my character. Tallahassee's a lot of fun. I loved the script; just generally, such a beautiful, well-written script, so funny." 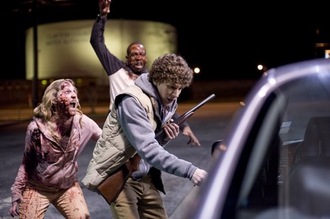 The character of Columbus stands in sharp contrast to the gun-toting Tallahassee. His theory on survival is less about brawn and more about running for your life. "I have a list of 47 rules on how to survive Zombieland," Eisenberg told the group of reporters.

Little by little, both Columbus and Tallahassee start to see the value in each other's strategies. "Towards the end of the movie, I start either crossing them off or modifying them," Eisenberg says of his character's rules. "I'm so stringent, whereas Woody's character is such a fun character, and he has zero rules to survive Zombieland, so it starts to rub off a little bit."

"He always limbers up before he does things," Harrelson says of Columbus. "There are several things that are fundamental to survival, according to his guidebook. Towards the end, I do a little bit of limbering up."

Stone's Wichita, meanwhile, is a con artist who is naturally distrustful of everyone, at least at first. She's also focused on her foremost goal of protecting her sister, Little Rock. But once she realizes that Tallahassee and Columbus are on the up and up, she allows herself to join in on the zombie-killing fun. "This is the first chance I've had to do something like that," Stone said. "It's just been really fun."

For those harboring a girl-with-shotgun fantasy (you know who you are), watching the raven-haired Stone blast attacking zombies is undeniably sexy. "I got to learn how to shoot a pump shotgun and load it," Stone said. But even after all the gun practice with fake rounds, Stone admits that she still doesn't feel ready for live ammo. "I don't think I actually want to own a gun," she said. "I wouldn't trust myself with a real gun all the time. I'm the clumsiest person in the world, and bad things would probably happen if I owned a gun."

The Zombieland production filmed its story mostly out of sequence for logistical reasons, so the climactic final action scenes at Playland Amusement Park were actually shot long before any of the earlier bonding scenes we witness on our visit.

"Initially, it was kinda odd," admits Harrelson. "But once we were into it, it was almost better to do it that way. I know personally, I had some ideas, some things I was going to try character-wise, a stuttering affectation. ... I'm just glad I didn't. It's better that we just started off doing the action stuff."

Eisenberg adds: "All the stuff at the end of the movie is action-oriented, so it's more of a gradual way of getting into it."

As Harrelson and Eisenberg ready for the night's lighthearted demolition, we asked what they were looking forward to destroying most.

"There's gonna be some tussles later on over who gets to do what," Harrelson said with a laugh.

"I want the feathers," Eisenberg responded.

At this, Harrelson raises on eyebrow. "What can you do to feathers? How do you hurt feathers?"

Eisenberg thinks about the question for a moment before adding, "You just drop 'em real slow."