With their new comedy satire Zombieland, writers Rhett Reese and Paul Wernick have come up with a new spin on the zombie genre. It honors the genre's conventions while turning them on their heads for laughs and a little romance.

We talked with the writers and picked their brains for the tastiest zombie scenes in recent films, and here's what they came up with. Not surprisingly, you may see winks or nods to these movies in Zombieland, which stars Woody Harrelson and opens Oct. 2.

'Twisted Metal' series from Zombieland, Deadpool writers to bring post-apocalyptic road rage to the small screen
Deadpool 2 originally had a much darker ending

"That's as great as it gets," Reese says. "I wouldn't call that strictly a zombie movie, but it is largely ... him fighting undead of various different sorts."

Mall Zombies, George A. Romero's 1978 original Dawn of the Dead.

"Just the mall, period," Reese says. "Everything about the mall; the fact that he decided to set it in a mall, I thought, was true genius."

"When that drop of blood falls down ... and lands in the guy's eyeball and turns him into a zombie, that's, that was a tremendous moment," Reese says. "And there were, uh, any number of moments in that movie."

"The guy walking out into the streets of London at the beginning, where, and just the car alarm going off, just immediately scares the crap out of you," Reese says. "Such a scary movie."

Shaun of the Dead - Throwing Records

Reese: "Sarah Polley, it's her ... and her ... boyfriend or whatever ... gets turned into a zombie, and he ends up chasing her down the street, and she's in the car and you think he's going to go all out to get her, and then suddenly he spies to his left some other person to attack or eat, and just peels off and goes and attacks the other person. That is awesome. ..." 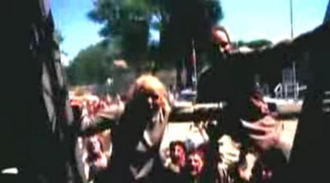 "They get that big truck and, smack, I think it's backing up towards the mall, and it takes out two or three zombies walking around. ... That was a wonderful moment," Reese says. 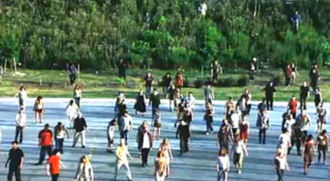 "And then my favorite moment from that movie is the sniping off the rooftop at the celebrity zombie lookalikes. It's like, and there's Jay Leno, and they shoot the guy that looks kind of like Jay Leno," Reese says.

Zombieland has its own celebrity cameo. "We almost had to go the celebrity lookalike route on ... ours, because we had such trouble, you know, finding the perfect fit for that role," Wernick says.

Zombieland doesn't contain quotes of these scenes, but "we were just very careful to try to create moments, you know?" Reese says. "Whether that be a piano falling on a zombie's head, whether that be a character moment, like a small thing, where a guy wants a Twinkie and instead he gets a Sno-Ball. You know, to not, to never forget that, despite all the spectacle of a post-apocalyptic movie, it's the little things that make it entertaining."