WE BROKE THE MOON! Name me a better way to end an episode of television. I'll wait…

Heist episodes are always fun. They're fast-paced and suspenseful and sometimes end with the moon breaking in half. This episode really brings the gang together and expresses that there are times in life when you need to be able to adopt the mentality of: I'll sleep when I'm dead.

When we started working on this episode in the Writers' Room, we only knew one thing: we wanted the episode to end with our heroes accidentally triggering the apocalypse. And early on in the planning of the entire season, the room also knew that at some point we were going to break the moon. So, when we got to Episode 505, the time felt right. That's how it works in the Writers' Room – you have certain story beats you know you'll use at some point in the season, but you're not always sure where they'll fit in the puzzle. Until you do.

While the script for this episode was the same length as the rest of our episodes, the edited cut came in super short. Heist episodes are quick and snappy, so once our action sequences were edited together, we realized that we would have to add a new scene to get the episode to the proper length. The solution was adding the scene between Kady and Zelda on the streets of Hell's Kitchen where they discuss Fogg being stuck in the Etheric Realm. Since we wrote the scene months after the episode had been filmed, we had to shoot it while we were shooting Episode 511. Like, literally at the same time. This resulted in Mike Moore (writer of 505, co-writer of 511, and the voice behind our bunnies) running back and forth between the two sets after each take. The added scene turned out to be a fantastic opportunity to touch base with two characters who have a lot on their minds, and provided an emotional breath to an otherwise frantic, muffin- fueled episode. 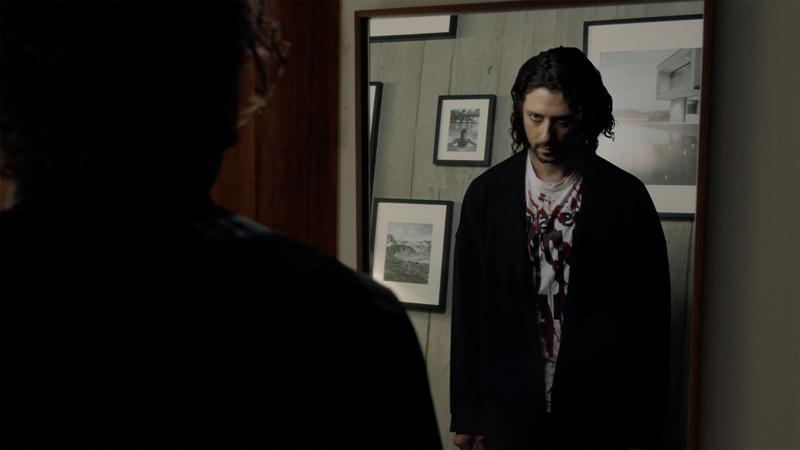 In the spirit of heists, now is a good time to tell the story of the door in the Writers' Room that leads to a mystery room with a stairwell. In the five years at our offices, we still have no idea where it goes and haven't been brave enough to find out. We're getting there, but unfortunately, we're not as brave as the heroes we write about. One day we were in the room and a man busted in through the mystery door, causing one of our assistants to shriek and fall out of her chair. Thankfully, she was fine. However, the man just casually closed the door, said nothing, and disappeared like nothing happened. So, we didn't have the chance to ask him where he came from. At this point, we can only assume the answer is Fillory and he was there on a heist mission to steal our unicorn hoodies.

In our Writers' Room, we have a few trophies with different sayings on them. One is a simple unicorn trophy with a piece of tape labeled AWESOME on it. This trophy is given out daily to whoever says the funniest or most profound thing in the room. Two other trophy examples are

1st Place in Giving Zero Fucks and FUCK YES YOU GLORIOUS BITCH. These trophies are given to individuals throughout the season for various reasons. One reason a trophy like FUCK YES YOU GLORIOUS BITCH might be given as a reward is if a writer is responsible for cracking the case on a missing piece for an episode that was keeping the room up at night. As far as Episode 505 goes, one fun case we had to crack was how our characters were going to be able to move the moon. At first, all we knew was we wanted them to go through some sort of magical ritual that they would learn from a religious group that worships the moon. We also knew we wanted them to go a bit crazy in the process. So, we pitched ideas to make sense of it all until someone pitched, "What if they have to stay up for several days straight in order to be able to move the moon?" From there, a snowball effect took place as "moon brain" and the other steps involved came to us more naturally. That's usually how it goes: discovering that one key ingredient unlocks an entire storyline and allows us all to get some rest.

So, good night. Or good morning depending on where in the world you are. Either way, just lay off the meth muffins. Talk more soon.