A very wise member of our Room once stated that when it comes to Episode Four of any season of television, there is one golden rule to remember: "Keep. Going."

It's at this point in the season, where we truly solidify and set up overarching through lines our characters will play out all the way to the finale. So the question of the episode became: How do we turn our character focus from grief to the new problems at hand?

Ironically, in most cases, each character's problem at hand was pretty much irony itself... Take Kady and Fogg's "trip" to the Etheric Realm. Both of these characters have struggled with addiction and it was fitting that they should have to surrender their sobriety for the answers they are searching for. This of course led to some of the most ridiculous set pieces in the entirety of The Magicians. 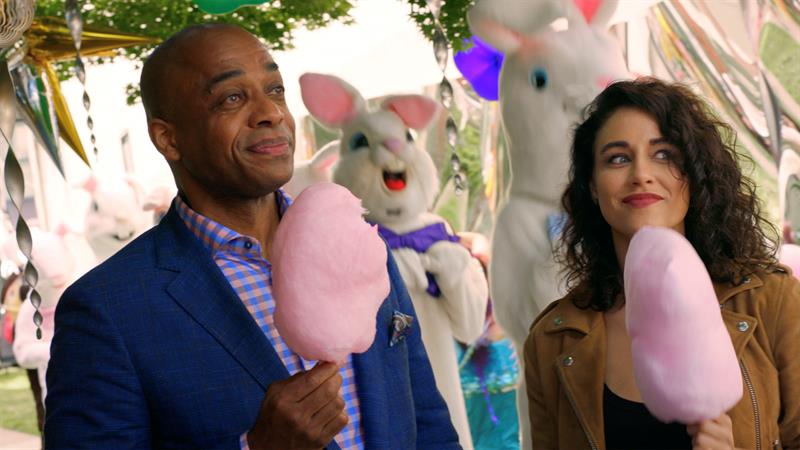 The Etheric Realm was an idea that had been tossed around for a while until we found a place for it as the hallucinogenic bridge dimension. The writer of this episode and one of our showrunners, John McNamara, especially loved the idea and relished the opportunity to conjure up such whimsical imagery. From businessmen on trampolines to bubbles, socks, and inflatable hamster balls, the design and execution of such a random surrealist landscape was surprisingly difficult. The people in bunny suits were originally going to be our actual messenger bunnies but we decided to save writer, Mike Moore's voice (Mike voices all the bunnies) because with all the other elements to wrangle, animals wouldn't have made anything easier.

Especially if they're named Mike...Also it should be noted that John's favorite parts were the rotating kinetic sculptures. He was completely fascinated and showed us examples for weeks.

In a similar twist of irony, having Zelda burn her beloved library is the last thing in the world she wants to do but it was crucial in setting up her arc and the rest of the season. We also wanted to take advantage of a few of our swing sets before we tore them down to make room for some new stage construction. The Visigoths were a funny addition because we didn't intentionally set out to specifically write them. The idea was borne out of just casually pitching the idea of Zelda and Alice barricading themselves in Zelda's office with some sort of wolf at the door. We had nicknamed the invaders Visigoths just as an ancient Roman reference in order to visualize, but the idea grew on us and we figured why not the Visigoths? 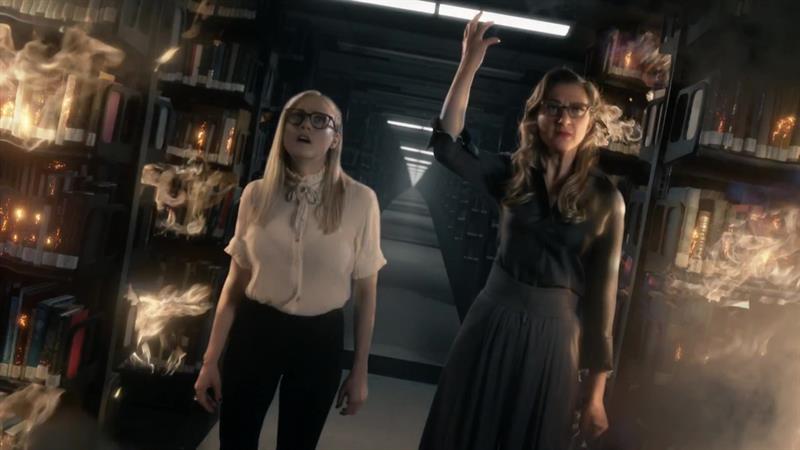 Brittany Curran, who plays Fen, was actually shadowing the writers' room for some of this episode's development. Most of the time when we have visitors to the room, we turn over all the plotting cards on the boards so we don't reveal spoilers. We have four big bulletin boards, meaning we are able to card four episodes at once and the whole room must take part in an efficient card turning. On this one however, we swore Brittany to secrecy as she got to hang out behind the curtain to see how we wizards make the sausage. Every actor on our show knows that each of their character's cards are color coded so we of course decided to take advantage of that fact to mess with her. Fen's color is lime green so we composed a bunch of ridiculous

fake Fen cards and scattered them across the board for her to randomly notice. Later, we were full steam into a brainstorm tangent when she suddenly broke into laughter, realizing what we'd done. We still don't know if it was "Fen becomes a Fillorian Cult Leader" or "Fen duets w/ Beyonce, gets record deal at Interscope" that got her. But as laughter subsided we couldn't help but ponder, "Wait. What if either of those did happen?"

Such is the journey at this stage. Anything and everything is a possibility. Yet, as Winston Churchill once stated from the plotting boards of his London Underground war bunkers: "If you're going through Episode Four, keep going."