"Something something Fillory, a most amazing land. Butt-fucked by catastrophe, and way
before we planned", Todd sings like a songbird to open up Episode 507. This episode had some very fun Todd moments. And whenever we have Todd moments, the Writers' Room becomes quite giddy because Todd is sort of an icon for us. Let me explain…

Every Tuesday in the Writers' Room is referred to as "Todd Tuesday". Why? Because our unicorn Queen, Sera Gamble, literally had T-shirts made with Todd's face on them for everyone to wear on Tuesdays. It's one of those things, like a story idea that finds its way into an episode, that just came about and stuck. We have been rocking our OG Todd shirts since the beginning of The Magicians, but for the first time in five seasons, Episode 507 inspired NEW Todd shirts! Here's how it happened: Sera was in an editing session working on the scene where Todd blows up and couldn't stop laughing at the final moments before he explodes. A freeze frame and a laughing fit later, a new image was decided on as the next "Todd Tuesday" T-shirt. Now, with two Todd shirts, if a writer shows up on Tuesday without their shirt, they can no longer use the excuse "my Todd shirt is in the laundry". 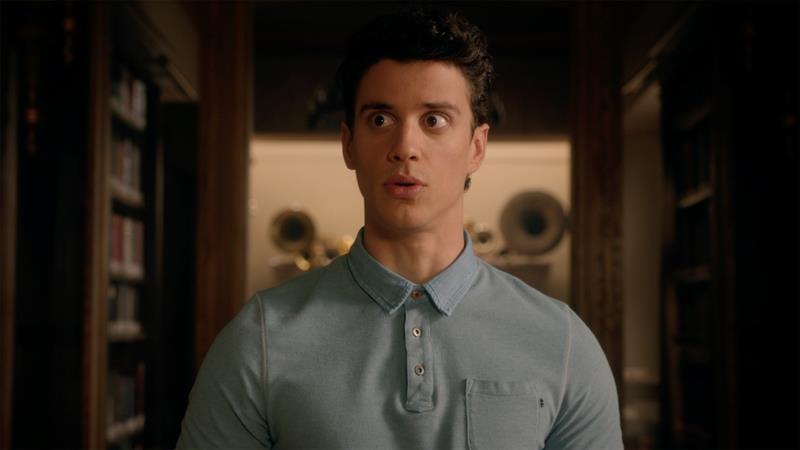 Speaking of the scene where Todd blows up, that was a really fun gag to shoot. On set, we blew up watermelons filled with fake blood, which looked pretty gnarly. We shot it once with Todd performing the action up until the explosion, once with Penny and Julia reacting in front of a green screen, and once strictly with the exploding watermelons of fake blood. Combine all those together in the editing room and voila, we have our scene of Todd exploding! The same day we shot that scene, Elle Lipson, writer of Episode 507, wore her Todd shirt to set. Naturally, Adam DiMarco, the actor who plays Todd, wanted to take a picture with her making the same face that matched the shirt. Thank you for being a gem, Adam.

Before we stop talking about Todd, let me elaborate on those vocal cords he got to show off in reciting the Pig Man's quest song. It wasn't always meant to be a song. At first, we had the Pig Man giving Todd his quest instructions in the form of a poem. But, as you now know, we like to have as much fun as possible with Todd. So, David Reed, our executive producer, came up with the idea to have Todd sing a song from the Pig Man instead. Sold! From there, Elle wrote up a full song of lyrics and our composer, Will Bates, came up with a tune to go along with it. Despite only the beginning of the song being in the episode, Adam learned the song in its entirety. For one of the takes, he sang the full song in one go and Elle sneakily filmed it over the director's shoulder.

Moving on from Todd so he doesn't hog this entire blog, let's talk about Rafe and his new animal. When we were breaking story for the episode, we decided we wanted to give Rafe a new animal to be the interpreter for in the absence of Abigail the Sloth (RIP). We reached out to production to ask what weird animals we could potentially get in Vancouver and one of the options they brought up was a wallaby. So, of course we thought it'd be fun to pick an animal as adorable as a wallaby and have Rafe absolutely despise her because A) she's a traitor to her own kind and in the pocket of the Dark King's administration, and B) she's not his beloved Abigail. To make it even funnier behind the scenes, the wallaby rode around set in her own carriage and was cute af. Not a bad gig!

This is the life of a writer on The Magicians – Todd Tuesdays and hanging with wallabies. Stay tuned for what else we have in store for you!