Missed the premiere of Vagrant Queen? Want a hint of what's to come this season? Here are 10 reasons -- in no particular order -- to tune in every Friday 10/9c for all-new action!

SPOILER ALERT: This blog contains spoilers from Episode 1. Read at your own risk!

Elida is badass, beautiful and has a sense of humor to boot. She's the last heir of a royal bloodline and she's on a relentless mission to avenge her family's throne. Yas, queen!

For those of us who love stories based on source material, there's a comic book for that. Vagrant Queen, the comic, was created by eisner-nominated and GLAAD Media Award-nominated author Magdelene Visaggio. Following in the footsteps of the comic's inspiring creator, the tv series boasts writer, director and producer, Jem Garrad as its Showrunner. And also? Every single episode was written and directed by women. Girl power, indeed!

Calling all Wynonna Earp fans! Doc's got a brand-new mission. Tim Rozon (the man behind Doc's mustache) plays a lovable deadbeat named Issac who's been living as a scavenger, desperate to make enough cash to buy his way home. We smell a backstory and we like it!

So, about that moment in the premiere episode when Elida saw Amae for the first time and Elida's heart went all pitter-patter in her leather vest…did anyone else get goosebumps? Will they or won't they fall in l-o-v-e this season? The verdict is still out but their initial meeting was enough reason for us to tune in each week to see what unfolds…

Any sci-fi series worth its salt has an interesting alien race(s) and humanoid society to cosplay as at the cons. We're thinking of going as this lady at NYCC. You?

Another way Vagrant Queen proves itself to be a solid sci-fi series? The fabulous and futuristic hair that makes no apology and gives us so much life!

Elida's mother was killed in front of her and she's been mourning her death in the years since. But wait, there's more!...Elida's mother is actually still alive! ***gasps*** Things just got real and they'll only get more all caps INTERESTING each week.

When Elida says she changed her name but literally everyone else thinks it sounds pretty similar to her real name? We genuinely LOL'd in agreement! Also, when her loyal subjects kneeled before Elida, pledging their unwavering allegiance to her crown. Her response: "Do you not hear the crazy?" It's one-liners like this that'll keep us coming back from more each week.

You know how there's always a ton of backstory when you watch a new series and it can be a lot to keep up with? Thankfully, Vagrant Queen makes it easy with helpful (and fun) flashbacks that give "The who," The what," and "The OMG, noooo!" without giving away too much, still managing to keep us on track.

What's a space adventure without a resident baddie like Commander Lazaro? Nothing. He's ruthless and power hungry and has a 15-year beef towards Elida's monarchy fueling his ire. Hello: depth, story arch and layers. We're so here for it.
The list speaks for itself but in case you need another reason to watch Vagrant Queen, here's the premiere episode. Watch and lets discuss @syfy ! 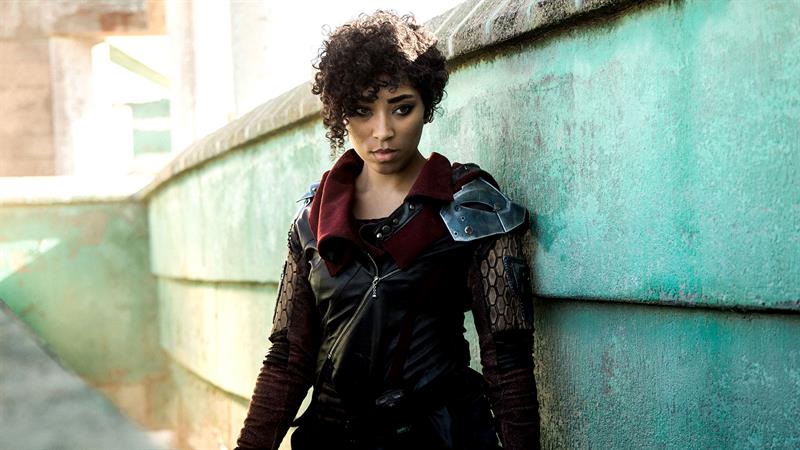