There's a new show in the galaxy, called Vagrant Queen, and it's coming your way this Friday at 10/9c courtesy of us, your pals at SYFY. We really want to make things easy for ya so here's everything you need to know before the big premiere!

THE WHO: It's this queen, this deadbeat and this mechanic against a whole damn galaxy!

THE QUEEN: Elida is a former queen turned scavenger who's been on the run since her throne was stolen as a child.

she's scrappy and stealthy and gonna be a whole lot of fun to watch!

THE DEADBEAT: Isaac is a charming, deadbeat Canadian. He was accidentally catapulted to this galaxy five years ago and has been living as a scavenger, desperate to make enough cash to buy his way home.

Translation: We're still geeking out that Doc Holiday's gonna be in space!!

THE MECHANIC: Amae is a skilled mechanic and pilot with an intelligent and caring soul who is always looking out for the little guy.

Brains and heart, we like it!
The short version is that Elida is on the run from a big-bad bully named Lazaro who brought down her family's empire and shot her mom. Yep — he's a bad, bad guy. So, when Elida's old frenemy, Isaac, show's up with news that Elida's mother is actually still alive, it's them - plus the plucky Amae - against Lazaro and his army, in a mission across the galaxy. Also making a cameo? Cannibalistic aliens, dangerous planets, shootouts, karaoke, and parking tickets!

The long version? You'll have to tune-in every Friday at a 10/9c to watch it all unfold.

THE WHEN: Every Friday 10/9c on SYFY …Oh, you mean when does the show take place? A long, long, LONG time from now.

THE WHERE: The galaxy…oh—you mean a specific location? In a galaxy far, far…SUPER far away.

Need more? Here's a treat in the form of a Season 1 official trailer. Watch, enjoy and tell us what you think @syfy! 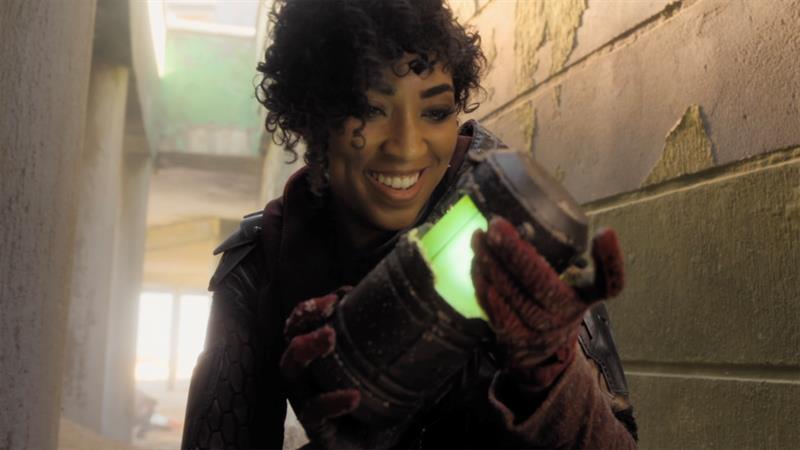 Vagrant Queen Premieres Friday, March 27 at 10/9c only on SYFY. Don't miss it!