How Hot Was #WayHaught: Season 3, Episode 6

Aside from the all of the demon-slaying, witty one-liners, and everyone's favorite doughnut-scarfing-crazy-chick-with-a-gun, Wynonna Earp Seasons 1 and 2 introduced us Wayhaught: the burgeoning relationship of Waverly and Nicole. There have been ups (the in flagrante pre-coital lift from 203. swayt jaysus) and there have been downs (Rosita in a hot tub. why hast thou forsaken us), but like any amazing rollercoaster we're screaming and shouting the whole way through.

In celebration of all things #WayHaught, we're going to chronicle their budding relationship in our continuing weekly series. We will answer the fundamental question that will be on your mind every Friday: How Hot Was WayHaught? Think of it like an episode recap, with pictures, and gifs, and all things #Wayhaught.

In celebration of the inaugural Earpmas  we happily bring to you
A Wayhaught poem so fresh and lovely it'll make your ship brand new.

The presents were wrapped, tampon angel aflight
When Doc lumbered in with a tree filled with mites
Michelle said, "Fat chance!" while Wynonna got trashed
Then moans bellowed out as some yams got well mashed

A new and clean face, appeared on that morn
Young Jeremy had shaved, his stache freshly shorn
And still he despaired with the fear he'd been ghosted
Not one single text, or post had been posted
Doc swooped in with some old timey advice
Be direct and be clear, don't make him think twice.

But things weren't looking up, and our Robin was taken
Gulping green goo like an egg, cheese and bacon
Yet love could still flourish for J and his baby
For his man hadn't ghosted, definitely, maybe.

Doc whispered his love to a whiskey-soaked maiden
With hopes that his words would surely awaken
The love in her heart would eclipse all the woe
But sadly his vows got the dismissal toe
With nowhere to go, and having lovesick pangs
Doc sought escape in Kate's cold-blooded fangs

And down at the station, Nedley could no longer bear it
The badge that he wore, he could no longer wear it
Haught's the new sheriff! So did Nedley resign
Free to binge Pretty Little Liars, like everything's fine

Quoting Home Alone and shooting her gun
Miss Earp paired with Charlie and shared in the fun
Sure Bulshar escaped, but the gang wasn't glum
Cause on this fair day, our boy done got some

"What's this!?" Haught declared when she saw Waves red frock
Can't bat my eyes fast enough to adequately gawk
But then came a dance and song for the season.
Death by Wayhaught, a most suitable reason 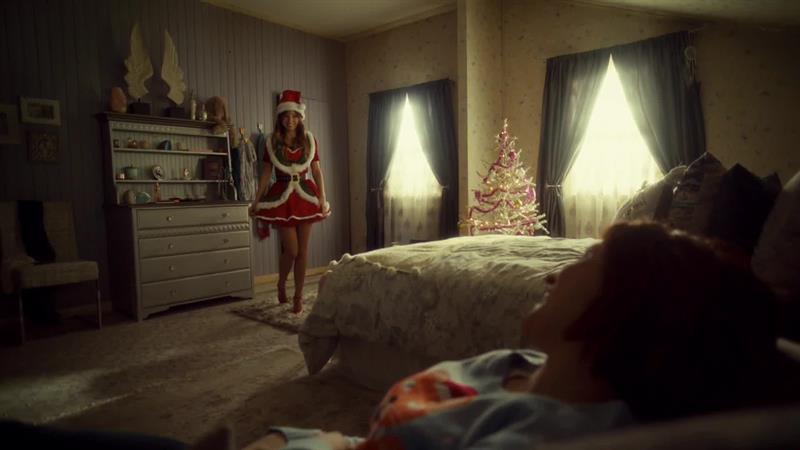 Doc left the Earp house, and he snuck to another
One that didn't house his lost baby's mother
He found joy in Kate's arms and received her vamp bite
Goodnight my sweet prince, and to Doc a good night

The Verdict is in on this Earp Christmas plot
All critics agree the ep hastag ....

Go Behind the Scenes of Wynonna Earp Season 4