Melanie Scrofano is not a morning person but she makes incredible pizza to make up for it. Get to know the girl behind the gutsy Wynonna Earp. Season 4 returns in 2020!

1. Weirdest place you've ever made out?

2. Which of your cast members would you trade Twitter accounts with for a day?

Kat Barrell (Officer Haught) - she gets so much 'Haught' Love!

3. Favorite food that's terrible for you?

No such thing as food that's terrible for you, unless you binge on it. Or unless there's rat poison in it. Or opium. So I guess, poppyseeds?

4. If you could live in any past decade, which would you live in and why?

6. Foreign language you wish you spoke?

Latin. I wish I could speak 'totally amazeballs' Latin.

7. Do you have any hidden talents (i.e. you can do a handstand)?

I have unreasonably strong leg muscles. Does that count?

Tim (Doc Holliday) and I were doing a very serious scene where I was confronting him about a horrible thing he did. There was a horse in the field beside us staring at us. STARING. The no blinking kind of staring. And. He was wearing a sweater.

9. Who's scarier first thing in the morning, a Revenant or you?

Me. I don't smile or talk before 10am, unless it's scripted.

A business tycoon. And a singer. Also an astronaut. And I wanted to live in a tent. But also a mansion.

11. What's your favorite city in the world to visit?

12. Which of your castmates would you like to switch characters with for an episode?

14. What Smurf would you be (I.e. Brainy Smurf, Vanity Smurf, etc….basically insert an adjective before "Smurf")

learned that my cat IS nice to people, just not to me.

16. What was your favorite book to read as a kid?

The Sword of Shannara

18. You're in the final round of a lip sync battle, which song do you pick to take home the glory?

The Garden by July Talk

19. If you had a trusty side-arm like Peacemaker, what would you call it?

I'm the worst person to ask, so I'll say Michael Keaton because I've met him and he's a swell guy.

22. What would your Wild Wild West name be? (let's say it's your childhood nickname and the town your mother grew up in)

Nellie-Mae Fort Simpson
(full disclosure nobody called me 'Nellie-Mae', I just thought it sounded like 'Melanie' but different)

24. Something about me I think people would be surprised to learn...

25. What's the first thing you do when you wake up in the morning?

Make coffee and not smile or talk. 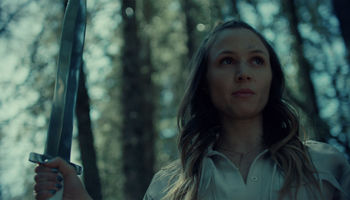