12 Monkeys' Dr. Jones and Dr. Ecklund prove that when it comes to love, age ain’t nothing but a number. Here’s a list of other seasoned couples who’ve proved that you can be amorous at any age.

2. Grace and Frankie: Sol and Robert

Fun Fact: Recent estimates suggest that there are at least 1.5 million lesbian, gay and bisexual people 65 and older in the US and this population will double by the year 2030. #lovewins

3. Dolly Parton and Carl Dean
The secret to a lasting relationship: “When I'm home, I spend Sunday with my husband. If we're not cooking, we travel around in our camper, stop at fast-food restaurants, and picnic. We love that stuff that will harden your arteries in a hurry. “ - Dolly Parton 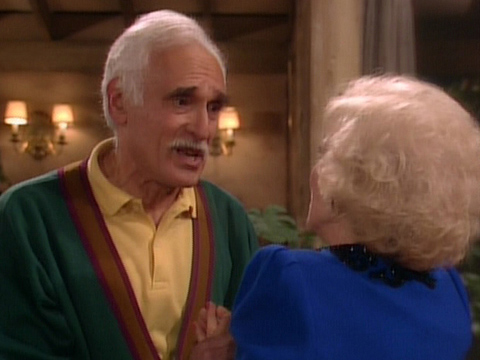 Fun Fact: All together Betty White, Bea Arthur, Rue McClanahan and Estelle Getty are 340 years old (the latter three's age at their death being counted).

Fun Fact: They’ve been boyfriend and girlfriend since 1986, forgoing a traditional “marriage” in the name of a spiritual union.

Fun Fact: Together, Meryl Streep and Tommy Lee Jones have had a total of 19 Academy Award nominations.

Fun Fact: Actors Pat Morita (Mr. Miyagi) and Nobu McCarthy (Yukie) were first linked in love (on TV) in 1976 in an episode of Happy Days when Morita’s character, Arnold, was to marry a girl name Momo (McCarthy). Also, yes, we totally just included Karate Kid Part II in a countdown.

Fun Fact: All together, Don Ameche/Gwen Verdon, Hume Cronyn/Jessica Tandy, Wilford Brimley/Maureen Stapleton are/were 498 years old (at the time of deaths of all except Wilford, who is still alive. Thank God).

11.  All My Children: Phoebe and Langley

This scene sums up the dynamic between Phoebe and Langley perfectly. They were the best.