The guy who plays Flynn Carroll, the hero of Hunters, looks a little familiar, doesn't he?

If you're a horror fan, there's a good chance you've seen Nathan Phillips before. However, before we venture into the dangerous Australian outback, the abandoned city of Chernobyl or an airplane at 30,000 feet, it's important to know that Nathan got his start with the role of John 'Teabag' Teasdale on the long-running Australian soap opera, Neighbours. Nathan appeared in 13 episodes in 1999. 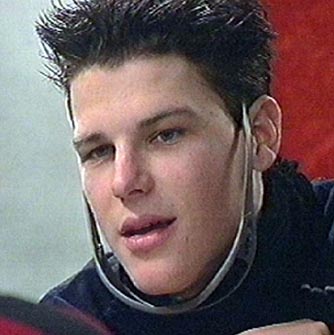 Nathan first ventured into horror territory with the role of Ben Mitchell in Wolf Creek (2005), the story of a group of backpackers lost in the Australian outback and at the mercy of a sadistic sociopath.

Nathan's Ben bears a striking resemblance to Nathan's Flynn Carroll on Hunters, no?

Nathan also had the honor of flying first class with Samuel L. Jackson in Snakes on a Plane (2006). He played Sean Jones, a surfer dude traveling from Honolulu to Los Angeles to give testimony against a mob boss.

Besides trading quips with Sam Jackson, Nathan's Sean got to flirt with the lovely Sunny Mabrey, who plays Tiffany, the stewardess with a heart of gold.

He got to save Tiffany from the fangs of rampaging venomous snakes at least once, too. Or maybe she saved him? It's hard to remember ... so much reptilian chaos!

Nathan's latest horror venture is Chernobyl Diaries (2012), the story of a group of backpackers who decide to spend their vacation ... in Chernobyl. Joining Nathan is Olivia Taylor Dudley, star of Syfy's The Magicians.

Haha, careening about, headed toward the site of the worst nuclear power plant disaster in history!

Sheesh. And some kids just go to Cancun.

Hunters Hits the Road to an Unknown Future

The Craziest Moments From Hunters

The Music of Hunters

Me Into the Wind

A Man With Vision