Unless you’ve been under a rock this Summer (it’s okay if you have, we don’t judge) you’ve probably heard the news that our merry trio of bounty hunters will be returning for a 5th and final season, Friday, July 19 at 10/9c! In case you need a reminder or introduction of the who, the where and the “wait, WHAT happened?!”, here’s a quick guide to get you caught up before Dutch, D’avin and Johnny grace us with their awesomeness, once more.

Killjoys 101:
Dutch and Johnny were best friends and intergalactic bounty hunters who worked for this company called “The Rac” AKA “The Company”. Then, Johnny’s hot, felonious older bother, D’avin joined the fold. Together, the trio:

1. Chased warrants across the galaxy
2. Quit working for The Company because the Company was up to no good and our gang had bigger fish to fry like…
a. Figuring out what the heck and how the heck Level 6 agents - killing machines dressed in human form - came to be
b. Fending off Khlyen, Dutch’s notoriously suave and stealthy father figure / mentor / assassin who just wont quit
3. Tracked down Aneelah, who’s Dutch’s doppelgänger and MUCH more. It’s complicated but Season 4 breaks it down nice  and easy.

How long will it take: 40 episodes at about 44 minutes each, so roughly … a while. It’s going to take a while. But you’ve got time, right? That’s what the lazy days of summer are for. So, grab a snack and get your binge on!

Why you’ll love it (or love it even more): Because it’s a show about space but it’s super down to Earth so everyone can relate. At its core, Killjoys is a show about friendship, love and the pursuit of bad assery.

Season 1, Episode 1 “Bangarang”: The Pilot of any good show is always a necessary primer and because it’s where we were first introduced to the incomprable bounty hunter known as Dutch. In the opening scenes she uses the beads in her necklace as a weapon to fend off a squadron of bad guys and kicks their butts in an evening gown. How freakin’ cool is that?! Pretty darn cool. This episode gives a good preview of the action that’s to come throughout the series.

Season 2, Episode 6 “I Love Lucy”: We got to see their ship, Lucy, personified and it was awesome. With her new body, Lucy got to rescue the team and share a sweet kiss with her beloved, Johnny. Also? We got to hear Dutch sing! Assassin, bounty hunter and entertainer - Dutch is a triple threat, indeed. This episode was a interesting exploration of Dutch’s past.

Season 3, Episode 2 “A Skinner, Darkly”: There was some seriously cool tech in this episode including: Skinners, hackmods and murderous cyborgs. Our takeaway? Always, be nice to your devices, because you never know when they’re going to have the technologically advanced upper hand. This episode it was all about geek-dome and gadgetry, and truly leaned into the sci-fi elements of the show.

Season 4, Episode 4, “What to Expect When You’re expecting …an Alien Parasite”: It's a super cool episode title and also we got to see D’avin’s baby make his entrance into the world! The occasion brings out the best (re: hilarious) moments of some other key players within the Killjoys universe: Delle Seyah, Pree, Zeph and Pip! This episode showcased why it’s cool to be a nerd. New team members Zeph and Pip are at their best when there’s a scientifically challenging problem to solve and we’re in awe watching them.

Season 4, Episode 10 “Sporemageddon”: You kinda need to watch the Season Finale so that the Season 5 Premiere makes sense, right? Right. Aneelah (Dutch was on to greener, liquid pastures at the time), Johnny and D’avin take on the Big Bad of the Season: The Lady. This episode was great because it answered all our questions about Aneelah’s origin and thus, Dutch’s origin; and because we love a good cliffhanger. When last we left them, the team is now living in an alternate universe where Dutch and Johnny are an item and D’avin is on the run. **waits on baited breath for next Season 5**

Again, you can watch all 4 seasons here or check out our essential guide above to get a taste of whats to come. Whatever you choose, just be sure to tune-in next Friday, July 19 at 10/9c on SYFY to make Killjoys’ last twirl around the galaxy a damn good one. 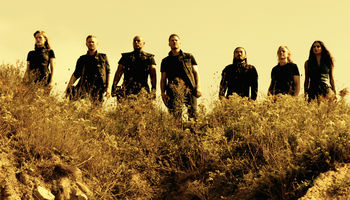 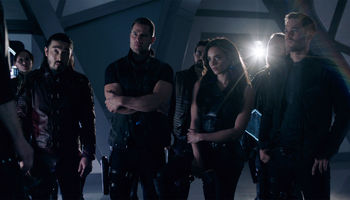