Ever wonder what it's like to produce a show? Luke Kalteux weighs in. Here, Krypton's Co-Executive Producer talks Kem's last stand in Season 2 Episode 9, which villian he'd like to portray and what he likes most about his job.

SYFY:  What were your feelings about having to kill off such an important character, Kem, in this episode? 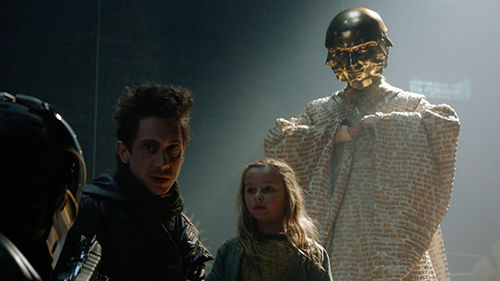 Luke Kalteux: Kem is a character I've personally had a blast writing for going all the way back to his and Ona's Nova Cycle journey in Season 1 Episode 4. But it's always about what the story needs, and not what we personally want as emotional human beings (our robot writers have an easier time with this conundrum). Story decisions on Krypton are never taken lightly by the writing staff, and that was especially true with regards to Kem's fate. So, you have long talks — Why should we do this? How does it serve the story? And how does it affect characters like Seg and Adam, as well as the Rebel cause and all of planet Krypton?

In the writer's room, it's no secret how much we all love Kem, and the man who brings him to humorous life, Rasmus Hardiker. Both bring tremendous heart to the show and set, respectively. Ultimately, we felt Kem's death was necessary to the growth of not just Seg, but the whole of the show. For Seg, being a hero takes on a new, powerful meaning in the face of this bittersweet tragedy.

SYFY: If so, can you please describe the cast/crew sentiments regarding Ras' last day on set?

LK: It was definitely hard for a lot of the cast and crew to say goodbye. So, there was a quiet to the day's work out of respect for Ras and all his generous humor and stellar work. And because Ras is such a joy, we all wanted to show our support and immense appreciation for everything he'd done for Team Krypton. If I remember correctly, Kem's final moments were the last setups filmed on Ras's last day, and the entire cast came out late that evening, even if they weren't scheduled to shoot — just to celebrate him. They had prepared a cake and were waiting in the wings when Ras stepped out of his final scene. There were lots of hugs and applause. It was an emotional send off for a wonderful actor and integral part of the show.

Believe it or not, Doomsday even left the craft service table long enough to give Ras a big ol' bear hug! Sure, it broke Ras' spine in three places, but it was SO sweet... you know... despite that awful crunching sound.

SYFY: What do you enjoy most about your job as Co- Executive Producer of Krypton?

LK: I get to see our creative process all the way through from start to finish. That's incredibly rewarding. To brainstorm in a vacuum with the writers for so long, then to put on my producer hat, fly to Northern Ireland, and step out on set to collaborate with such a fun-loving cast and crew - and collectively build the entire world of Krypton out of thin air - nothing beats that feeling.

SYFY: Sometimes, villains get a bad rap. If you could be any villain for a day (Zod, Doomsday, Lobo or Brainiac) who would you choose and why?

LK: I would say LOBO hands down. Trottin' around the cosmos on a space Harley, hangin' out with space dolphins?! C'mon, ya can't beat that! And that healing factor could come in mighty handy if I don't make a deadline. For instance, I could walk up to work, holding my own severed head, and say: "Sorry, I missed my deadline, (Showrunner) Cam Welsh, but as you can see... I'm slightly headless at the moment." Who can argue with that? Not Cam Welsh, that's who.

SYFY: We know it's hard to pick just one but what was your favorite scene from Episode 9? 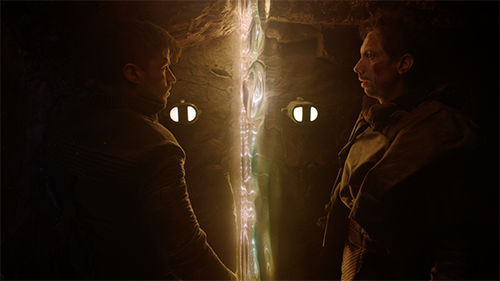 LK: This is actually not hard to pick! Despite so many awesome scenes in Episode 9, Seg and Kem's goodbye is pitch perfect to me. Directed beautifully by showrunner Cam Welsh — who knows these characters inside and out — and performed to a degree infinitely better than what we could've imagined while dreaming it up, that scene hits me right in the feels every time I see it. Watching those two friends say goodbye makes me love Kem and Seg that much more, which is so torturous given what happens soon after.

LK: It's so difficult to choose given all the heroic "ass-crushing" (thank you for that phrase Kem and Adam) that goes on in this episode. Nyssa takes Zod's ship in spectacular fashion, Val holds strong in a crumbling Rebel base to help Seg, and Adam makes a huge sacrifice to save Val's life, but personally, my hero for 209 is Kem. Episode 209 really is his swan song. But Adam saving Val from the rubble is a close second. Watching a fully-formed Adam sacrifice himself on sheer selfless instinct, is a great moment that shows how far he's come since we met him, and also helps serve up a nice heroic one-two punch from two knuckleheads with a lot of heart.

LK: My hero of season 2... wow, there's so many... but I'd have to say, at the risk of sounding like a brown-noser... Showrunner, Cam Welsh. Working so closely with this guy for two seasons (as well as a few other shows over the years), it's still hard for me to grasp how he does it. He works across three time zones: his home Australia, his writers and post teams in LA, and his production team in Belfast. The guy barely sleeps in order to breathe life into this show and makes decisions on everything, from prop designs, costumes, scripts, editing, vfx, budget, and casting... not to mention he managed to direct the hell out of our biggest episode to date (209). Without Cam, there would be no Krypton as we know it today. And if I could contain Cam in a Doomsday level sarcophagus for eternity, to be taken out ONLY for seasons of television and used for the sole purpose of pillaging his creative mind, I would. Although... I have a feeling he'd punch his way out of it, too. Nothing stops that guy...

SYFY: If Doomsday were real, which real-life planet would you ship him to?

LK: If Doomsday were real (which he IS), I'd probably ship him off to lonely Pluto and have him smash it to space particles so we can finally put an end to its planetary status debate. Planet? Dwarf planet? Pluto needs to go folks! Clean slate! It's created too much confusion and our emotions can't handle the back and forth anymore. Say it with me folks: #PlutoMUSTgo. And Doomsday is just the perfect misunderstood monster to get the job done!

Want to hear more from Luke? Check out his behind the scenes interviews in Decryping Krypton here and here.