Soooo... Lyta's back! For real this time. The actress behind "Clone" Lyta and "OG" Lyta gives behind the scenes details on the making of Episode 8. In our exclusive interview, the actress talks Black Mercy slime, choosing fight scenes over heels and what her relationship is like, in real life, with her TV son Dru Zod.

SYFY: We were SHOCKED to see the **real** you appear in Episode 208. How does it feel to be alive?!
Georgina Campbell: It was definitely a bit of a shock. I was glad to see the return of the real Lyta, it was fun to play around with the character at the beginning of the series as her reconditioned clone. However, I was very happy to see the return of the OG Lyta with all her many complexities, she's been on a quite a journey.

SYFY: If you could have a clone in real life, what chores / or tasks would you assign to your clone?
GC: I'd ask my clone to take over social aspects of my life, it would be amazing to just send a clone out for events and parties while I sit at home and read a book! I'd never have fomo and also never need to leave my flat.

SYFY: Was it uncomfortable to shoot the scenes where your body was hooked up to the Black Mercy? How long were those shoots? 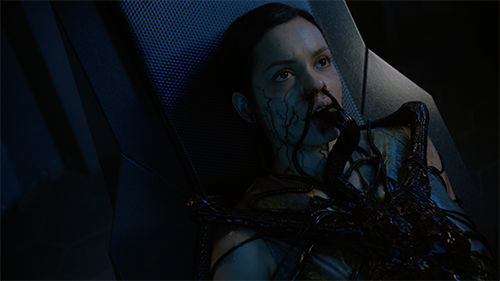 GC: It was very uncomfortable! I was in the Black Mercy for a lot of shots, I think for a whole day. There was an ungodly amount of slime, we we're shooting in winter so it was pretty cold, and once the creature had been placed on me, I couldn't move as it took so long to set. It was an incredible experience though, I really enjoyed it. I'm a huge fan of the Alien movies, the Black Mercy really felt like a H.R. Giger creation because it was beautifully designed. I had a blast!

SYFY: In Episode 8, the fantasy scenes are gorgeous…until they got dark... What was your favorite part about filming those scenes - the non-depressing parts of course?

GC: It was just enjoyable to laugh and goof around for the first part of the episode. Lyta is such a dark character she rarely has any comic relief. It all feels very serious playing her. I love seeing her playful and happy. It's such a rare occurrence!

SYFY: As an actor, what was the most emotionally or physically challenging part about filming Episode 8? 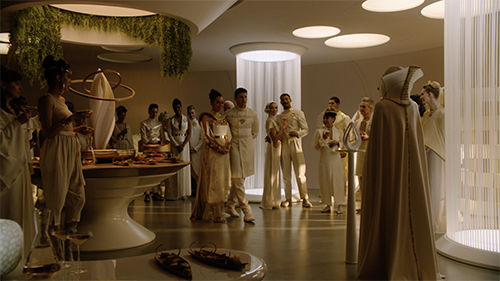 GC: The wedding dress. Honestly, I was so excited to be out of Sagitari uniform, but that wedding dress was so uncomfortable. Also wearing heels… I was in a lot of pain during those scenes, I'd take a fight sequence over that costume any day.

GC: Colin is an amazing person through and through. He's so kind and giving, he's a seasoned, incredible actor and just a joy to have on set. I really love working with him, as do all the cast. He really is the glue of the show and this Season it has been fascinating to watch him work.

SYFY: The hair department has created some really interesting looks for your character. Which one of your Season 2 hairstyles was your favorite and why?

GC: I really enjoyed the black mercy look; the outfit, the hair, the black veins all over my face and body. It was very science fiction and beautifully disturbing.

SYFY: Are there any similarities between you and your character? If so, what are they? 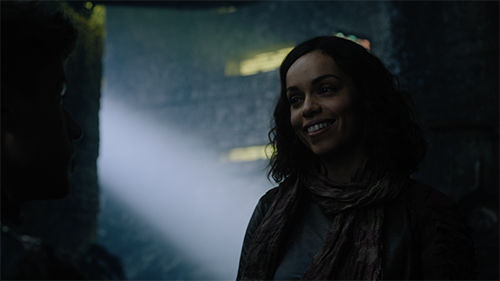 GC: Well we look pretty similar… Honestly, Lyta and I are polar opposites in a lot of ways. She makes me feel like a badass though, I really enjoy walking in her shoes.


See all-new episodes of Krypton every Wednesday at 10/9c only on SYFY!

*This interview has been edited for length and/or clarity.
It's a fan thing
Join SYFY Insider to get access to exclusive videos and interviews, breaking news, sweepstakes, and more!
Sign Up for Free
You May Also Like
Recommended by Zergnet
Latest News