This week, we had a nice chat with Krypton's Showrunner, Cam Welsh, to talk Season 2 Episode 7, what it's like to be a showrunner and which Season 2 prop he now proudly owns (hint: Lobo might be jealous).

SYFY: We know it's hard to pick just one but what was your favorite scene from Episode 7?
Cam Welsh: The final sequence is my favorite part of the episode because it's so heartbreaking and such a shocking twist – and it sets up so much fun story for the future.

SYFY: We get that you're more of a behind the scenes guy, but if you could play one character from Episode 7 who would you be and why?
CW: I would have liked to be part of Kem and Adam's squad that go on the mission to find the missing Sagitari. I like the idea of watching Adam and Kem squabble like an old married couple and it's always fun on set with Shaun and Rasmus.

SYFY: There are so many funny moments in this episode. How do you maintain the balance between humor and seriousness throughout the series?

CW: I subscribe to the theory that when in doubt, write a gag. My feeling is the show works better with a lighter tone, but the drama and the stakes must always feel real. Our characters mostly take the situation seriously, just not themselves.

SYFY: What's the most difficult part about being the Showrunner of Krypton?
CW: It's a challenging job on many levels but I guess that's what makes it so rewarding. The job involves a lot of decision making and the sheer volume of questions that need answering can be overwhelming at times, but I have an excellent team that lightens the load whenever that happens.

SYFY: In Episode 7, the naming of Jor-El was such a mic drop moment for fans of the Universe, how did you decided where to place this moment within the Season? 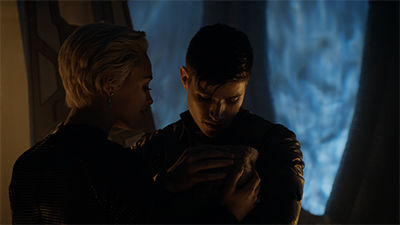 CW: It felt right to do this in 207, knowing where we wanted to go with the rest of the Season. We needed to have Seg, Nyssa, and Jor all in the same place at the same time and this is the first time that happens all Season. It sets the stage for the last few episodes of the Season.

SYFY: If you could belong to any House: El, Vex or Em, which House would you belong and why?
CW: Why not House Zod? Why can't I be a Zod?! I'd be an El because they have the best capes.

SYFY: Where there any props from this episode / or this Season that you wanted to take home with you?
CW: Not just wanted – did take home! I am the proud owner of Lobo's BFG (Big Fraggin' Gun). My office is full of lots of little cool things from Seasons 1 and 2.

See all-new episodes of Krypton every Wednesday at 10/9c only on SYFY!

*This interview has been edited for length and/or clarity.

You May Also Like
Recommended by Zergnet
Latest Posts

2 years ago
See All Videos