What's the Next Sharknado?

Sharks + Tornadoes = Sharknado. It's a tale as old as time: Washed up surf star tries to protect his fragile family life from a maelstrom of sharks, teeth, and death. You can experience all the Sharknado your heart desires with the 3rd 'Nado in the installment Sharknado 3: Oh Hell No!  But what of this surefire formula of success? Certainly this can't be the only Animal + Natural = Movie Event of the Century. Of course not. Tarantulas + Avalanches + Lava = Lavalantula arriving July 25th at 9/8c. But this got us thinking....there are LOTS of potential franchises where animals mix with natural disasters for insane goodness. Below are some films WE'D like to see made.!

Premise: Judge Rienhold plays Paddy Ruxpin a washed up pitching coach for the Chicago Cubs, who’s looking for one last shot at redemption with young upstart Teddy Tremors, a Southpaw whom he’s groomed from Single A. Paddy hopes to ride the wave of Teddy’s success to regain favor within the organization as well as with his wife, a feisty bartender with a heart of gold. But Paddy’s dreams will have to wait when a devastating Earthquake erupts during the middle of a game, unleashing a deluge of Kodiak Killers upon an unsuspecting Chi-town crowd

Premise:  Maisie Breakers is a lifeguard with the perfect life. She’s got the perfect job, perfect husband (Corey Feldman) and a loving daughter who was just accepted into Eastern Michigan University. Maisie’s seeming utopia is turned upside down when a rogue Lake Michigan wave of emus swoops in and snatches her daughter, and it’s up to Maisie her hubby and a cell phon geo-locator to bring back their little hatchling to the nest.

Tagline: This wave is about to break ... your legs

Premise: Two city slickers will get more than they bargained for when they spend a weekend at their friends ranch in Montana. Elie and Vance are in need of some good-old fashioned fresh air and slow living, so when they get an invitation to tend their friends farm for the weekend they jump at the chance. Little do they know that the sleepy town of Dumberg has some very strange weather patterns and the couple is for a weekend they’ll never forget… nor will their adversaries.

Tagline: They packed their suitcases, but they should have never opened the trunk

Premise: Gary and his mother-in-law have never been close and the recent death of his father, seems like the perfect excuse to put her out of his life for good. But the odd pair gets stuck departing from the funeral, and they’ll have to work together if they have any hope of escaping, the Snail Smog

Premise: Dominique is a graduate student at one of the most prestigious ornithology programs in the country, but her graduate thesis is so zany that even her mentor and teacher may have no choice but to fail her. Dominique is convinced that a rogue squadron of hawks has been plotting the end of the world. When Dom’s theory begins to come true the only way she’ll be able to defender her thesis, and the world, is by stopping the impending Ahawkalypse.

Premise: Two plumbers, Jake and Lake, have begun to notice a strange pattern of clogs cropping up in suburban America, but the local government refuses to listen to their warning. When enormous pythons begins to rise out of toilets across the globe it’s up to J&L plumbing services to flush America of its sewage problem.

Premise: Ping and Rocky are two World Wildlife Federation workers with passion in and out of the office. But when Ping wakes up one morning to discover that she has been transformed into the very animal that she vowed to protect, she knows that something has gone dangerously wrong. Now, Ping and Rocky will be forced to reverse their efforts and take down as many pandas as possible, before the entire human population undergoes this horrifying metamorphosis.

Tagline: The whole human race is about to be endangered

Premise: A mad scientist/pinball fanatic has finalized his plan to turn the world into a giant pinball arena, by triggering armadillos' natural defense system via ultrasonic sound waves. Armadillos across the globe begin to curl up and roll, but his plan may be foiled when his nemesis activates the fight response in a violent crew of honey badgers who will stop at nothing to sate their Armadillo hunger. Featuring a surprise guest appearance by The Who 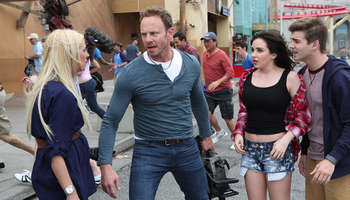 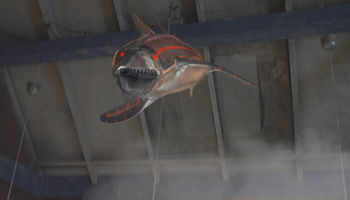 Sharknado Week Is Upon Us 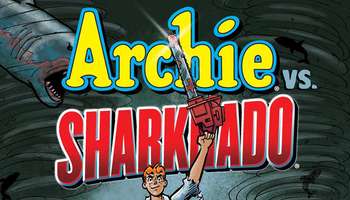 Greatest Comic Ever? Archie vs. Sharknado