The 90’s are back, and so is the horror that came with them. I Know What You Did Last Summer (1997) has returned as a television series, and the Scream franchise, originally born in 1996, will also return in 2022. Everything 90’s is new again!

The reboot train is going to chug along whether we want it to or not. Nostalgia and reinvention will rule the day, so we might as well hitch our cars to that chugging train and make some requests.

There are plenty of 90’s gems (both hidden and unhidden) that should receive attention. Full-on remakes aren’t required, some of these entries may benefit from continuations. Some may work as new films, and the gaping maw of streaming television is always looking for fresh chuck.

Here are some 90’s horror movies that we wouldn’t mind seeing return. As long as we don’t have to relive the 90’s themselves, everyone wins. 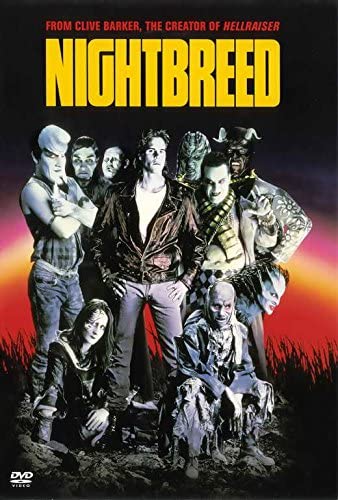 You can’t go wrong with Clive Barker, who both wrote and directed this dark 1990 fantasy. A serial killer pretends to be a psychiatrist and convinces another man that he has committed all of the murders that the killer/doctor is actually responsible for. Along the way, the man encounters the city of Midian, where folklore monsters are real and accepted. That’s barely scratching the surface.

The film was a failure, though it has a large cult following and Barker managed to create a Director’s Cut in 2014. There’s an insane amount of world building at play here, so we could see this entire concept working well as a series. It could lure in those who cherish the original as well as wholly new audiences. If we had our way, Barker himself would be heavily involved.

In the original, David Cronenberg played the serial killer, Dr. Phillip Decker. Though he’s likely too old for that part (or a new counterpart) now, it would be silly not to ask him to make some kind of cameo.

It’s a tall order trying to remake anything that Guillermo del Toro has touched, but here we are. He directed this 1997 insect nightmare, and worked on the adaptation of the original short story by Donald A. Wolheim. The story boils down to Mira Sorvino trying to destroy all cockroaches with other insects, only for those insects to turn on the human race and begin to evolve at an unnerving rate.

That’s a prescient tale in and of itself, and there’s a lot to like here. Jeremy Northam, Josh Brolin, and F. Murray Abraham all appear, so plusses all around. The studio had it’s way with it, but del Toro’s early style is still evident.

Were the insects that mimic human characteristics truly gone for good? Apparently not, because two sequels were made and a new series may be in the works already. If we were calling the shots, we’d ignore the sequels from the aughts and put Sorvino and Northam back into the middle of the Judas brood. If del Toro wanted to return in any way, so much the better. All we’re really asking for is one shot of Northam turning to Sorvino and saying, “Sheesh, when will this accursed mimicry end?” That’s not a big ask.

Worry not, this little bit of spacetime nightmare fuel is already coming back. Directed by Paul W.S. Anderson in 1997, this “spaceship vanishes and then comes back possessed” movie featured Sam Neill, Laurence Fishburne, Jason Isaacs, and more.

It’s not an easy watch, and it’s one of those movies that makes us never want to go to space. It was a financial failure, but has gained a cult following since release. That’s going to be an ongoing theme with this list.

Space horror is in a class unto itself, and it scares us in myriad different ways. Paramount Plus is likely counting on this, as they have a series based on the story in the works. We would have thought remake movie, but a streaming series would allow the base story depicted here to expand. We’d love Sam Neill to cameo in it, but he’s probably not going to cameo in it.

For anyone who wants more content in the “a group of strangers are stuck in a deadly maze” variety, look no further. That’s exactly what this 1997 movie is. Directed by Vincenzo Natali, it has the honor of having Nicole de Boer (Star Trek: Deep Space Nine) in the cast. Six strangers have to work together to escape a series of connected cubes, and they have to do it before they all starve to death.

Two sequels already exist, but we’re surprised that there aren’t ten or eleven of these things. If you can make two movies called Escape Room then you can get more milk from the cow called Cube. The real horror in 2021 and onward is that no group of six strangers would ever be able to work together to achieve anything; each sequel would end with six dead people.

We envisioned streamers possibly wanting to snatch this property up as a way to mimic the success of Squid Game, but wouldn’t you know it? Japan already has a remake coming. Our wishes are coming true all around us.

A rampaging creature is loose in a museum, and only an anthropologist and one tough cop can stop it. Who doesn’t want that?

The original 1997 film (based on the book Relic by Douglas Preston and Lincoln Child) is as silly as the above paragraph, but this story definitely has remake potential. It would be Night at the Museum meets Jurassic Park, with a South American deity monster set loose on a rampage in a museum.

With some modern effects, it would work. Do they make it deadly serious, or take more a tongue-in-cheek attitude with it? We’re unsure, but if they can manage to lock into whatever magic made the 1999 Mummy remake work, then that’s the way to go. If they want to cast Brendan Fraser and Rachel Weisz, we’ll hit the green light right now. Bring back original cast member Linda Hunt, and we’ll give it two green lights.

The teachers are aliens! The only way for this movie to be more 90’s would be if Mr. Belding appeared in it. You had Elijah Wood, Josh Hartnett, Clea Duvall, and Jordana Brewster as students. As the teachers (who were actually aliens), you had Famke Janssen, Christopher McDonald, and Robert Patrick. Salma Hayek was the school nurse, and Bebe Neuwirth was the principal.

Come on, this one is begging to return. It’s banging on the door. The original 1998 romp from Robert Rodriquez isn’t exactly Parasite, but it’s a lot of fun. Most of that is because of the cast, which would be hard to beat.

A reboot/remake/continuation movie could happen; take the surviving students and make them the alien teachers, cast hot newcomers as a new group of students. A series could also work though, because if Gossip Girl can have two shows within the span of just a few years, then they can make this concept work long-term. A little Chilling Adventures of Sabrina magic tossed in with some modern social media tik-tokery could make a new alien faculty fun to watch each week.

The title gives this one away: it’s about vampires. They will gain the ability to walk in daylight unless a vamp hunter stops them from retrieving a magical Catholic McGuffin. There’s an Edward Cullen joke here somewhere but we’re not gonna make it.

The 1998 original starred James Woods and Sheryl Lee, but it is mostly notable because John Carpenter directed it. That’s the same reason we’d want bring it back.

Carpenter is all the rage these days. Forget that, he’s always been hot. His touch makes this movie somewhat memorable, and in the age of Halloween Kills (not directed by him, but it is a continuation of his classic), everyone should be looking to get themselves some tangential Carpenter. If he wanted to be involved? You’ve really got something. If he didn’t, you may have something anyway. Whether it’s a show, a remake, or a total reboot, we’d only have one demand: Sheryl Lee stays. Don’t care how or why, let Laura Palmer have this one.

Dean Koontz wasn’t just a running joke for one episode of Children’s Hospital. He also writes horror! Of course he writes horror, and this 1998 movie is based on his book of the same name. Something is afoot in the town of Snowfield, and a small band of people have to deal with it. On hand is Peter O’ Toole, Rose McGowan, Liev Schreiber, and Ben “he was the bomb in Phantoms” Affleck.

The work of Koontz is not adapted nearly as much as it could be. The 90’s were good to him, as was the format of the TV Movie, so we’re seeing streaming all over the place here. An ongoing streaming remake could serve Phantoms, with the horrific shenanigans of Snowfield providing a backdrop. That said, it’s almost not worth doing without a cameo from Affleck.

We’re thinking total TV reboot. You can still feature students at a college researching urban myths and legends, but the myths and legends that they study can be a little more interesting. As they research the legends, they find themselves caught up in them. A streaming show could almost focus on one legend per season, something akin to How To Get Away With Murder.

Or they could just do whatever they wanted to without our help. There’s fertile soil left to till in this idea, so we think it’s only a matter of time before some executive goes on a Joshua Jackson binge and discovers this.

Not to be confused with The Haunting or The Haunting of Hill House, this 1999 movie made sure we’d always remember Famke Janssen… just in case The Faculty (and GoldenEye) didn’t already seal that deal.

What have we got? We’ve got an eccentric dollar store Six Flags mogul offering people a cool million to stay overnight in a haunted house. The premise was not original in 1999, it was itself a remake from the Vincent Price starring classic of 1959. A 2007 sequel, Return to House on Haunted Hill, also exists.

No one can do what Vincent Price did, and the remake was so 90’s that it wouldn’t work that way either. The central premise is interesting, so reboot it again, either as a movie or a series. Because of it being 2021, there’s little that many of us wouldn’t do for money. They could really ratchet that aspect up through the haunted roof. The house wouldn’t be nearly as frightening as imminent financial collapse, so we ain’t afraid of no ghosts.