Even though we believe the fast food industry is a modern invention, it seems like ancient residents of Pompeii were prone to grabbing a quick bite on the run as well some 2,000 years ago, as evidenced by a newly discovered eatery that offered up easy meals for busy Pompeiians.

Italian archaeologists have completely excavated a remarkable frescoed thermopolium (hot food and drink shop) in Pompeii, which was the infamous Italian city suffocated in scorching volcanic gases, then buried in hot ash following the violent eruption of Mount Vesuvius in 79 CE. 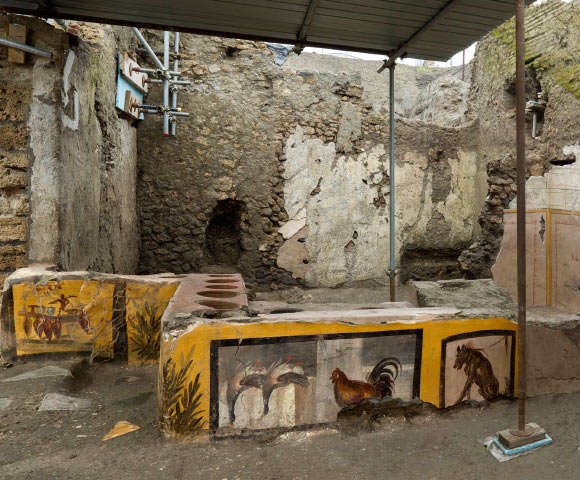 “Thermopolia, where drinks and hot foods were served and stored in large dolia (jars) embedded in the masonry counter, were widespread in the Roman world, where it was typical to consume the prandium (the meal) outside the house. In Pompeii alone there are 80 thermopolia,” explained Dr. Massimo Osanna, interim director general of the Parco Archeologico di Pompei, and colleagues in an official statement. “As well as being another insight into daily life at Pompeii, the possibilities for study of the newly-discovered thermopolium are exceptional, because for the first time an area of this type has been excavated in its entirety, and it has been possible to carry out all the analyses that today’s technology permits.” Its counter was equipped with a series of deep terracotta jars to serve hot foods from, and its façade was painted with several intriguing frescoes portraying a nymph on a seahorse, two upside-down ducks, a rooster, and a fierce dog on a leash, perhaps acting as a warning to customers trying to dine and ditch.

“The decorations on the counter comprise the image of a Nereid riding a seahorse in a marine setting on the front, while the shorter side features an illustration which is probably of the shop itself, like a kind of trademark,” the archaeologists noted. 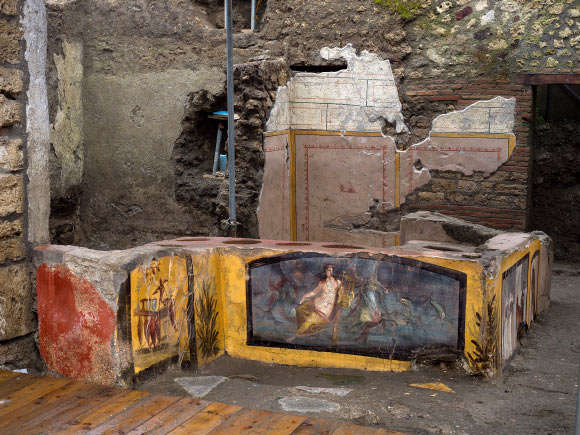 2,000-year-old remains of duck, goats, pigs, fish, and land snails were also found at the bottom of containers left in the counter slots. Preliminary analyses indicate that the counter paintings partially depicted the snack bar's menu of foodstuffs and drinks which sold inside the thermopolium.

"The finds will be further [analyzed] in the laboratory," Osanna added in the same statement. "And in particular those remains found in the dolia (terracotta containers) of the counter are expected to yield exceptional data for informing an understanding of what was sold and what the diet was like."

It's a fan thing
Join SYFY Insider to get access to exclusive videos and interviews, breaking news, sweepstakes, and more!
Sign Up for Free
All Posts About
News
Science
Pompeii
archaeology
Related Stories

Is a new human species emerging from an underground cave?