Normally, this wouldn’t be news, except that this fragment of interplanetary debris was pretty big, probably massing dozens of kilograms. It broke up high over the ground, creating a fireball bright enough to be witnessed across three states. Most of it became vapor and very small chunks, but one piece, with a mass of 3.9 kilos (8.5 pounds), survived its atmospheric entry. Falling at terminal velocity—a couple of hundred kilometers per hour—it made it all the way to the ground.

Kinda. Actually, there were two things in its way: a house, and Ann Hodges.

The rock slammed into the house, punching a hole in the roof. Still moving rapidly, it hit a radio (at the time, a pretty big affair), caromed off, and smacked into the hand and hip of Ms. Hodges, who was napping on the couch nearby. It left a fierce bruise on her side that, to this day, still gives me the willies. This event is the most well-documented case of a human hit by a meteorite in history.

I first read about the Sylacauga meteorite when I was a wee lad, visiting a friend’s house. They had a complete collection of the well-known Time Life series of books, which covered various topics like biology, geology, and space. The article in one book had the picture of Hodges that made her famous, showing that enormous bruise. I was already a huge dork about space then, but those books, and that picture, strengthened my excitement. Getting nonfatally hit by a meteorite sounded like the coolest thing ever to me.

What I didn’t know at the time (and probably wouldn’t have appreciated at such a young age) was the real story that happened after Hodges was hit. There are some fairly complete articles about the aftermath at the Encyclopedia of Alabama and the Decatur Daily.

Basically, there was a tussle over who owned the meteorite. Hodges and her husband were renting the house from one Birdie (or Bertie) Guy. Legally, Guy owned the meteorite, since it landed on her property, but public opinion, unsurprisingly, sided with Hodges to keep it. The legal wrestling went on for some time until Guy gave up the lawsuit. But by that time interest had waned, and no one wanted to buy the rock. Hodges—and this brings me pain to write—used it as a doorstop. She eventually donated it to the Alabama Museum of Natural History, where it’s still on display. 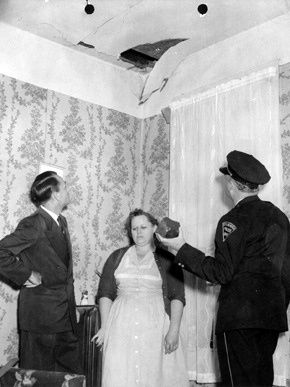 A fist-sized meteorite (held by the man, right) broke through the roof of a house and struck Anne Hodges (middle) in 1954. Credit: University of Alabama Museums

That rock, even at the time, was worth a fortune. To give you an idea, a second piece was found not far away by a farmer on his property. He was able to sell it and buy a new house and a car. And his piece was less than half the mass of the Hodges chunk, with less notoriety as well. Were something like that to happen today, the meteorite would sell for a lot of money.

Hodges’ legal problems were so great that her mental and physical health suffered. She and her husband divorced, and she died of kidney failure in 1972 at the relatively young age of 52. It’s easy to wonder how much the event led to her decline. I also wonder, if Guy and the Hodges had been able to reach a friendly agreement, how their lives might have worked out for the better?

Postscript: Interestingly, in the fall of 2012 a smaller meteorite broke up and rained debris in Alabama not far from the earlier event. That’s just a coincidence, just like the coincidence that the drive-in theater across the street from where the Hodges lived was called The Comet! Author Fannie Flagg also wrote an homage to the event in her book Fried Green Tomatoes; in it a meteorite hits a radio in a character’s house, who took it in stride.

It’s sad that real life didn’t work out so well for the Hodges. I collect meteorites; it’s a hobby of mine. I love their fantastic shapes, the science behind them, knowing they came from the Moon, or asteroids, or Mars. Holding a rock in your hand and knowing it’s more than 4 billion years old is profoundly moving. But some have a human story as well, and those can be just as moving. We think of the Universe as remote, inaccessible; but sometimes it reaches down and touches our lives. In many ways, what happens after that is up to us.